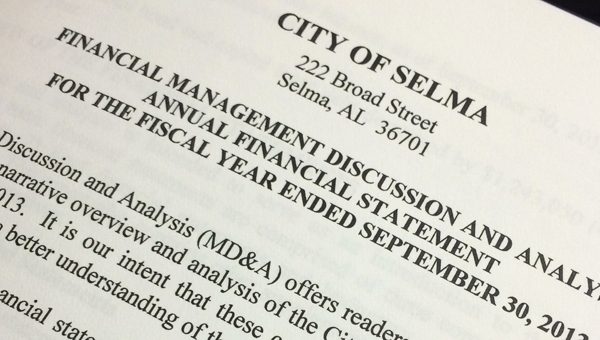 Only three members of the Selma City Council took part in a called meeting Tuesday to hear a report from auditors reviewing the city’s finances from the 2013 fiscal year. — Tim Reeves

The Selma City Council received an “unmodified” report from auditors Tuesday, showing the city “lived within its means” during the fiscal year ending Sept. 30, 2013.

But, the good news was not heard by the majority of the council. Only three members of the council, and Evans, attended the publicized meeting and review.

During the review, Billy Daniels, with the accounting firm Warren Averett, went through the city’s assets, liabilities and long-term debt for the last fiscal year, which ended Sept. 30.

During the review, Daniels also detailed how the city’s financial reports were impacted by the ongoing expenditures tied to the 2010 bond issue, approved by voters in 2009.

As projects are paid out and completed, the amounts are removed from the financials, showing losses, or expenses. When the funds were placed in the city’s accounts in 2010, the full funds were counted as revenue.

The city is continuing to work with auditors on a full review, which would include recommendations by the auditors on suggested changes to the city’s accounting practices.

As city leaders continue to examine the trending decline of sales tax revenues, the city’s revenues were relatively flat between 2012 and 2013.

The Alabama Court of Criminal Appeals upheld the convictions of two individuals Friday, one charged with capital murder, the other... read more