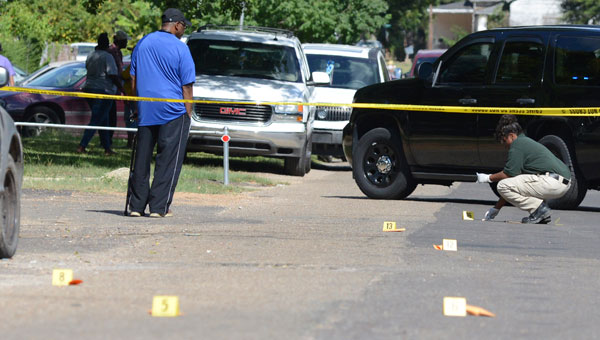 Police investigators look over more than a dozen bullet casings after a shooting occurred Tuesday afternoon on the 1500 block of Philpot Avenue. (Jay Sowers | Times-Journal)

By Sarah Robinson and Jay Sowers

An afternoon drive-by shooting on the 1500 block of Philpot Avenue has sent two Selma teenagers to the hospital.

Selma Police responded to a call around 2:30 p.m. Tuesday concerning a shooting from the roadway on the 1500 block of Philpot Avenue, roughly a block away from both Payne Elementary School and Gospel Tabernacle Church. The victims, a 15-year-old female, and an 18-year-old male, both of Selma, were sitting on the porch of the female’s house at the time of the incident.

“Based on some the witnesses’ statements made on the scene, there was a white Ford Crown Victorica, possibly being occupied by people from the GWC Homes area,” Selma Police investigator Lt. Curtis Muhannad said.

Officials were able to locate the vehicle matching the description in an alley near GWC homes, with spent rounds inside. Muhannad said the casings lead police to believe it was the same car used during the incident.

Police have not yet located the weapon used during in Tuesday’s shooting.

“We are still trying to determine exactly how many rounds were fired,” Muhannad said.

At least 16 bullet casings could be seen under police markers after responding officers had blocked off the area.

The victims were sent to Vaughn Regional Medical Center’s emergency room for treatment and were listed in stable condition.

“Right now, our response is to take a proactive measure and to try to round up possible suspects involved in the shooting,” Muhannad said.

A witness, who asked to not be identified, said she was walking along the sidewalk across from where the bullets were aimed when the shooting began.

“I was heading to go get my daughter from school, and I hadn’t made it very far, when the car pulled up and started shooting,” the witness said. “I just started running, and they actually passed me after I started running.”

The woman said she was walking toward Payne Elementary School when the shots rang out.

“I just had my three little kids with me, so I just tried to get us all out of the way,” she said. “I’ve never seen anything like this.”

A sixth grade Brantley teacher has been suspended without pay after a now complete investigation revealed she allowed her class... read more