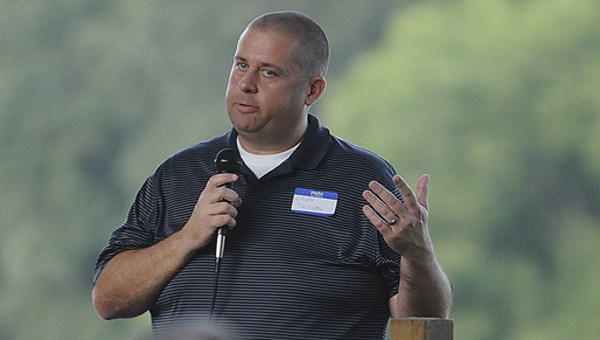 Above, Jason Caldwell of Inside the Auburn Tigers talks during Monday night’s Selma Quarterback Club meeting at Julius Talton’s house on the Alabama River. Below, Ryan Fowler, who hosts “The Game” radio show in Tuscaloosa, discusses the Crimson TIde.–Daniel Evans

The Selma Quarterback Club kicked off its season Monday night at Julius Talton’s house on the Alabama River.

Jason Caldwell, associate editor of Inside the Auburn Tigers magazine, and Ryan Fowler, sports talk host of “The Game” radio show based in Tuscaloosa., were the first speakers of the year and they not disappoint.

Fowler discussed the Alabama quarterback battle, which up to the point has still not been settled.

Blake Sims and Florida State transfer Jacob Coker are both listed atop the Crimson Tide’s depth chart, but Fowler is pretty confident that Sims will be the starter.

“I think it’s obvious but I’ve been saying it for 14 or 15 days now,” Fowler said. “Jacob Coker has the upside to be a big time quarterback in this league and he has some natural ability, but I think it is going to just come with time.”

Fowler said Sims “has worked his butt off” to be in position to win the job and, in his eyes,  has outplayed Coker this fall in practices.

The Alabama insider also said this year’s defense can be as good as two of the best defensive units in Crimson Tide history.

“I think this team on the defensive side of the ball has a chance to be 1992 or 2009 good,” Fowler said. “They have ten solid defensive lineman that are as quick and as big as Alabama has ever had.”

Caldwell thinks Auburn has a chance to once again make some noise this year, with Gus Malzahn coming back with his staff in place and quarterback Nick Marshall returning.

“It starts with having an entire coaching staff back for a second year,” Caldwell said of Auburn. “That doesn’t happen a lot nowadays in college football, and I think that is a strong point for Auburn.”

Caldwell said Auburn has a chance to be really good, but he isn’t sure the Tigers’ final record will be better than the Tigers’ 12-2 mark in 2013.

“This is an Auburn team that I think has a chance to be better than they were last year,” Caldwell said. “But the schedule is also much tougher. We are talking about five teams on the road, five bowl teams.”

Caldwell is very concerned about a road game the Tigers play at Kansas State on a Thursday night Sept. 18.

“I’m not sure this Auburn team will play in an environment where there will be fewer Auburn fans than there will in Manhattan, Kan. on A Thursday night,” Caldwell said.

The next quarterback club meeting will be held at the Carl C. Morgan Convention Center on Sept. 8. Former University of Alabama standout Major Ogilvie will be the speaker.

Membership dues are $175 for the entire season.

Jeff Levins hits from a bunker on the eighteenth hole during the Sav-A-Life golf tournament Saturday at Valley Grande Golf... read more