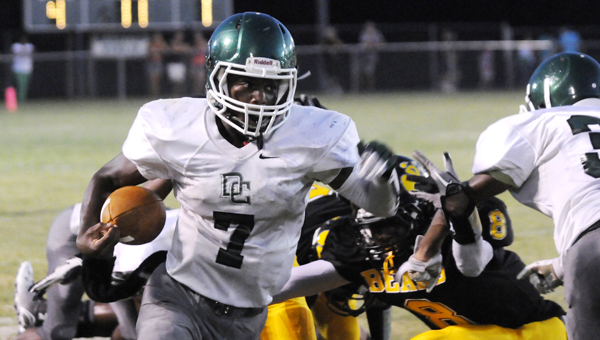 PLANTERSVILLE — The Dallas County Hornets hosted the Billingsley Bears in a jamboree coming out on the losing end, 22-0 after the two-quarter scrimmage.

Billingsley, which finished last year 8-3 in Class 1A, feasted on the big play as the Hornets unofficially gave up 209-yards of offense to the Bears with 131-yards of it coming on two pass plays for touchdowns.

“The way I want to play and the way we want to play here at Dallas County is we cannot give up the big play,” said Hornets’ first year head coach Marty Smith.  “We’ve got to make sure we take care of business in the trenches.”

The Bears scored on their first series on a 12-play, 59-yard march down the field highlighted by a 28-yard pitch and catch from Bears’ quarterback Thomas Nichols to Jaytarius Steele. Nichols capped the drive with a 2-yard dash off left tackle.

Dallas County looked to match Billingsley’s opening drive with one of their own, but after a 15-play drive including a 20-yard burst on a fourth and 12 by Hornets’ QB Xavier Knight, Dallas County turned the ball over on downs deep in Billingsley territory.

Smith said much of what his bunch showed on offense and defense were basics meant to get them in some coachable game situations.

“We were very vanilla tonight. We only ran four plays offensively and I only allowed the coaches to run one stunt defensively,” Smith said. “I wanted to put the kids in a situation where I could get them on film.”

After a Nichols’ interception by Patrick Haskell, Dallas County returned the favor when Derrick Dunnigan picked off Knight. It didn’t take long for the Bears to capitalize on another big play with Nichols again finding Steele over the middle for an 88-yard touchdown on a third and 13 play.

The Bears tacked on their final score on another long pass play when Dalton Davis found Alex Cobb down the left sideline for a 43-yard touchdown.

Smith told his team afterward its conditioning was a major factor in the results.

“We’ve got to get better offensively and defensively on the line and everything will take care of itself if we can take care of our business,” Smith said.

Keith had its way with Autaugaville  Friday in a 24-2 victory in its jamboree game. Travis Goldsby and Deanthony Griffin... read more