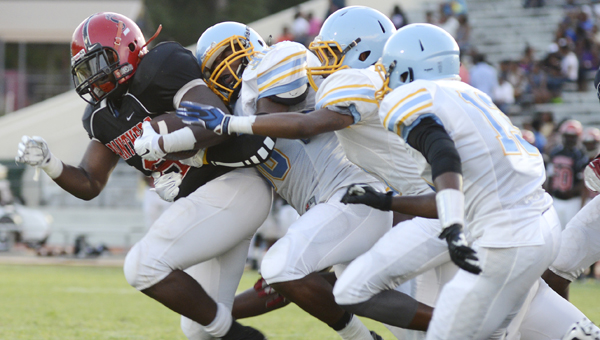 The Selma defense made it tough for Southside to find positive yardage during Friday’s game at Memorial Stadium. Southside’s running game was grounded most of the evening in the 42-6 defeat — the Panthers’ tenth consecutive loss to the Saints.–Jay Sowers

Boggs threw two touchdown passes in the second quarter and ran in two more to help the Saints win their tenth consecutive game over their county rivals.

“It’s a big win for our program to get us off to a good start,” said Selma head coach Leroy Miles. “You always want to try to win your first game of the season and we were fortunate enough. It was a sloppy played game but we will take those too.”

As if trying to slow Boggs down wasn’t enough, the Panthers had their own quarterback problems to deal with. Southside starting quarterback Khamari Gibbs sat out the game after dealing with a nagging hip injury all week and backup Scott Cole left the game in the third quarter with an undisclosed injury.

“It hurt us a lot with Khamari not playing,” said Southside head coach Daniel Flowers. “[Scott] got hurt in the second quarter and we had to go to our emergency quarterback in Jhlandius [Sullivan].”

Cole played pretty well in his first game starting, but the absence of Gibbs, a three year starter, was too much to overcome for the Panthers. Miles said he found out Gibbs wasn’t playing when Southside took the field Friday night.

“It made them one dimensional where they couldn’t do a whole lot,” Miles said. “We didn’t have to worry about the pass a whole lot, and we were able to shut the run down because we knew he wasn’t present. I’m sure if he was present it would’ve been a different outcome.”

Meanwhile, after a shaky start that saw him fumble on the first play, Boggs played a very controlled game that showed why Division I football teams are recruting him.

“He started off slow and he missed one call we made and I got onto him and got him focused,” Miles said. “He got on the right track and got going.”

The turning point in the game ended up being a Southside turnover.

In a scoreless game, Cole fumbled at his own 1-yard line and Selma recovered, setting Boggs up for a 1-yard touchdown run to put Selma on the board.

With Gibbs, who serves as Southside’s long snapper out, the Panthers struggled to successfully punt the ball all night.

Twice Southside punter Brandon Hope was tackled in the backfield before he could get punts away, giving Selma great field possession that led to easy touchdowns.

The first botched punt gave Selma a short field and led to Boggs again running in from 1-yard out to give the Saints a 12-0 lead.

After a Boggs 40-yard touchdown pass to Marquell Moorer with 3:45 left in the second quarter gave Selma a 20-6 lead, the Saints forced Southside to punt again.

A second poor snap gave Hope trouble and he was tackled at the Southside 20-yard line. On the next play, Boggs threw a touchdown pass to Cyron Ellis to give the Saints a 26-6 lead with 53.7 seconds left in the half.

“I’m very pleased with the output of our special teams,” Miles said. “We work on those every day, and I think we won that phase of the game. That’s what kept us in the game.”

Selma continued pulling away in the second half as Kerry Ford dove in from 3-yards out to give the Saints a 34-6 advantage early in the third quarter. James Hampton scored the game’s final touchdown on an 18-yard run with 51.5 seconds left in the fourth quarter.

Southside’s lone touchdown of the night came on a miraculous play.

Cole threw a 96-yard touchdown pass to DeQuan Johnson that ricocheted off of two Selma defenders to make the score 12-6 Saints.

The pass was actually thrown to Delundre Edwards, but came up short and was tipped up in the air into the waiting arms of Johnson, who scampered down the sideline for a touchdown that briefly gave the Panthers momentum.

Southside players had trouble with cramps the entire game. Over a dozen times Panthers players had to be helped off the field with cramps, as the depth difference between a 4A school and a 6A school started to show.

“We fed the kids three times today,” Flowers said. “We had pickles, we had mustard, we had everything but when it is 100 degrees outside and the wind isn’t blowing it goes that way. I even caught cramps standing on the sideline.”

The game was chippy throughout with numerous personal foul calls being called on each team.

Southside starting running back Damon Watts and Selma linebacker Brandon Hatcher were ejected from the game in the third quarter for getting into it after a play was over.

Miles said he plans on watching tape to see which of his players lost their cool during the game and disciplining those players next week.

Selma will play Dallas County at Memorial Stadium next Friday while Southside will travel to Keith.

Both games are scheduled to kickoff at 7 p.m.

Flowers said he expects Gibbs to play next week against the Bears.