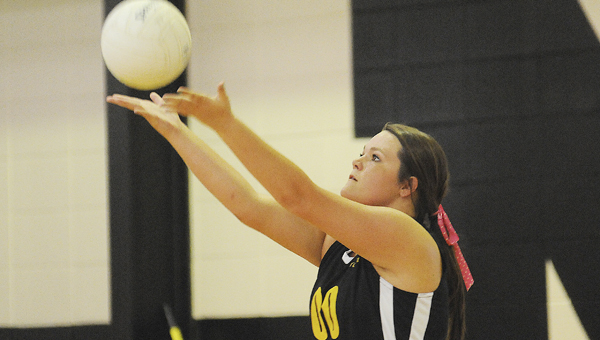 Meadowview Christian bounced back from its first defeat of the season in a big way.

The Lady Trojans (2-1) dominated Marion Academy 25-11, 25-7, 25-4 in a match that was never in doubt. Meadowview’s Jesse Boswell started the match off with 16 successful serves in a row, giving her team a massive lead in a first set that the Trojans would not relinquish.

“[Jesse] has gotten back there the last two or three games in a row and has served up seven or eight in a row in two different games,” said Meadowview Christian head coach Tim Burton. “It helps a lot when you can jump out to a lead.”

For a young Marion Academy squad, the deficit was too big to overcome and it might have affected their confidence as well.

“Just looking at the girls, [a big deficit] is real tough on them,” Marion Academy coach Don Boyle said. “I can see that. It doesn’t’ bother me as much because I know they can do it, but they do struggle trying to come back and get their composure back.”

As both teams made substitutions, the Panthers tried to claw their way back to make the opening set close, but the Lady Trojans quickly shut the door.

The second set was a lot tighter, as Meadowview led only 8-4 in the early stages, but the Lady Trojans found their groove and raced to a 25-7 victory.

The third game was the least competitive of the match as Meadowview won 25-4 behind great serving that prevented the Panthers from gaining possession of the ball.

Burton said it can be a challenge to keep his team focused with such a large lead, but the players handled it well..

“It is a challenge to keep them focused, but a lot of them want to play,” Burton said. “A lot of them are aching for the ball to come back over to give them a chance to hit it again.”

It’s been an up and down season for Meadowview thus far.

The Trojans had a tough time in an opening preseason tournament in Oxford but bounced back with a win in their home opener against Chilton Christian. Earlier this week, the Lady Trojans lost to New Life Christian in four sets. Burton said the loss to New Life Christian was a close, well-played match.

Meadowview will try to start a winning streak in its next match Sept. 2 on the road against Victory Christian.