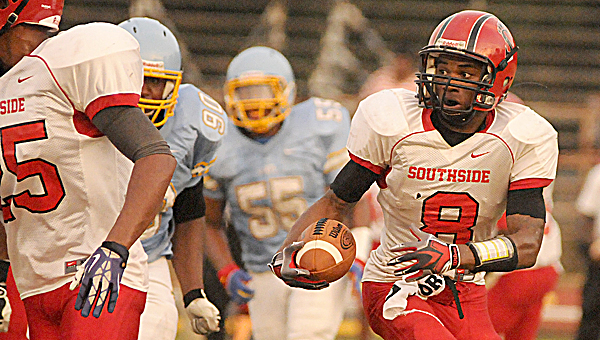 Southside and Selma will kickoff their 2014 football season’s at Memorial Stadium Friday night. The Panthers have not defeated the Saints since 2004. Selma won last season’s meeting 34-8.–File Photo

Rivalries don’t get any bigger in Dallas County than Southside versus Selma, who will meet Friday night at Memorial Stadium to kick off their 2014 football seasons.

The annual series has been one-sided for nearly the last decade as Selma has won the last nine games between the two schools — the longest winning streak in the game’s history. The last time Southside won was in 2004, which was also the last time the Panthers scored more than eight points against the Saints.

Either Selma’s winning streak will reach a full decade Friday or Southside will finally break through.

“The key is not focusing on breaking the streak but playing our game,” Southside quarterback Khamari Gibbs said. “We need to remember what we are supposed to do, do our assignments, stop them from what they want to do, and control the game.”

Each team will also have to battle their emotions, which typically run rampant when in a rivalry game.

“The team that can handle the emotional part of the game early on when your adrenaline is pumping real high is key,” said Selma head coach Leroy Miles. “We’ve been in big games before and we try to coach our kids that they can’t play the game before the game is played.”

In Miles’ four years at Selma, the Saints have outscored Southside 176-16. Southside head coach Daniel Flowers has been on the wrong side of lopsided scores the last two seasons and he’s ready to see his team break through.

“We have to make those guys uncomfortable,” Flowers said. “They sit there and run the ball left and right, because they have been dominant. Physically, they have been better than we are.”

Selma is expected to dress around 75 kids for the game, compared to 44 on Southside’s official roster.

Despite the numbers advantage — which is typical for a game involving a 6A school and a 4A school — Flowers feels like this group of Panthers is up for the challenge.

“I feel these are the guys that can beat Selma,” Flowers said. “We have the depth now in the key positions, in the trenches. We have about 17 lineman and two or three running backs and two or three quarterbacks. Finally the depth has caught up.”

Southside would like to be in the game in the fourth quarter, something the Panthers have failed to do in recent years. Last season, Southside held the ball for nearly 14 minutes in the first quarter, but trailed 21-0 after the opening period because of special teams mistakes and turnovers.

“[Turnovers have] been the thorn in my side,” Flowers said. “We’ve been practicing ball protection so much and getting hit and holding onto the ball. I feel like if we don’t turn the ball over we have a great chance to win the game. That’s the key to the game.”

Selma’s defense has controlled the game the last nine years, giving up only 3.7 points per game in that time span. Saints’ linebacker Aderick Moore said his team needs to stay focused on what it’s trying to accomplish in Friday’s game.

“We have to play disciplined and go out there be focused and stay on the same page,” Moore said. “We have to play like we practice but even harder. Everybody has to do their assignment and have fun and just play ball.”

WHAT TO WATCH: Selma ran a kickoff and a punt back for touchdowns in last year’s 34-8 win over Southside. Special teams could play a big factor again in Friday night’s contest.

PLAYER TO WATCH:  Damon Watts, Southside running back. While a lot of the eyes will be on the quarterbacks, Watts is a dynamic playmaker that will have to have a big night in order for the Panthers to be in the game.

SERIES HISTORY:  Dating back to 2004, Selma has won the last nine games in the series.

Following a down year that saw the Eagles go 2-8, Ellwood Christian is looking for a bounce back season. In the 2013 game versus Francis Marion, the Eagles fumbled the ball five times in a double digit loss.

SERIES HISTORY: The teams have split their only two meetings in 2012 and 2013. Francis Marion won last year’s meeting 30-12.

After finding some offense in last week’s jamboree games at New Life Christian, Meadowview seems poised for a bounce back season.

Trojans’ quarterback C.J. Grimes scored four times in last week’s jamboree victory against East Memorial Christian Academy and should have the ball in his hands a lot Friday.

KEY STAT: Meadowview has played a spring and fall jamboree game as an 8-man football squad, but Friday night it becomes official when the Trojans play their first regular season 8-man football contest.

Morgan Academy at No. 6 Wilcox Academy

WHAT TO WATCH: This is Morgan Academy head coach Jake Wingo’s first game with the Senators. In two years at Sumter Academy, Wingo had a 6-15 record.

SERIES HISTORY: Wilcox and Morgan have met in the regular season six times since 2006. The Senators have won four of those six games, with both Morgan losses being by three points.

NOTE: Dallas County will play one half against Billingsley and one against Isabella. Gordo will also take part in the jamboree, but the Hornets will not face the Green Wave.

WHAT TO WATCH: The Hornets have struggled in back to back 2-8 seasons, but will look to change things with an impressive showing Friday. Marty Smith will coach his first game for the Hornets. He’s the fifth head coach in five seasons for DCHS.

WHAT TO WATCH: Keith is out to prove it’s still a force to be reckoned with in Class 1A. The Bears have made the playoffs the last six seasons.

Last year Paul Garner needed to shoot a 68 on the final day of the Selma Country Club Championship to... read more