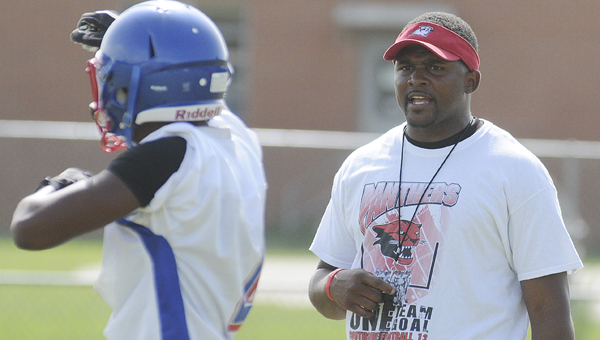 Southside head coach Daniel Flowers talks to a player from Linden High School during a 7-on-7 game earlier this season. Flowers, who is entering his third year as the head coach for the Panthers, is expecting Friday’s game against rival Selma High School to be a close game. Southside has not defeated Selma since 2004.–Daniel Evans

Southside players and coaches believe this is the year when the Panthers can finally break the school’s nine-year losing streak against Selma.

“Words couldn’t even explain what it would be like to win Friday night,” said senior offensive tackle William Bonner. “As a senior, I’ve  never been close to it.”

To say the rivalry has been one-sided may not be giving the Saints enough credit. Selma has won every meeting since 2004, and the majority of the contests have not been close.

The Saints have outscored the Panthers 301-34 over the last nine years, with eight of the nine games decided by over 20 points.

“Until we beat them, they are always going to be the big brother,” Southside head coach Daniel Flowers said. “It’s our coaches versus their coaches, and our kids versus their kids. It’s going to come down to who has the heart and the grit, because it is going to be a close game this year.”

Flowers said the last two seasons Southside’s junior varsity squad beat Selma’s junior varsity, which should give his team confidence because it’ll be a lot of the same players on the field Friday night.

Another reason for Southside’s optimism is quarterback Khamari Gibbs, who has struggled in his two previous meetings against Selma. The junior signal caller said this year’s Panthers team wants to be the one that turns the series around.

“[The game] means a lot because the record is definitely not in our favor, especially in recent years and the overall record,” Gibbs said. “We want to be that team that breaks the streak, that made the difference.”

In last year’s game, Gibbs ran for 83 yards and Southside’s offense dominated early, but the Panthers were unable to overcome turnovers that put them in a deep hole.

A strong offseason with renewed hope has the Panthers believing that once again this could be the year when they take down their cross-town rivals.

“We have a totally different attitude,” said Southside senior running back Damon Watts. “I’ve never seen my team like this before. We are a lot more focused, have a lot more attitude and everybody is just better this year.”