Working on cars is a lifelong passion 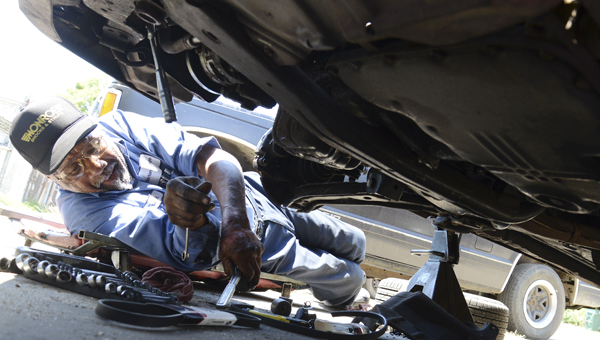 If you are looking for Frank Blocton, odds are he’s under the hood.

When he was only 13-years-old, Blocton admits now, he would pester his older brother to teach him how to fix cars.

“I used to get in his way when he was trying to work, but when he found out I wanted to learn what he knew, he would have me pass him the tool he needed for one job or another,” Blocton said. “I just wanted to learn.”

Blocton, now 72, has not lost his desire to learn about everything that rolls into his Selma Avenue garage.

“I like a challenge,” Blocton said. “I couldn’t tell you how many times I get challenged a day with this job. Working on cars is a challenge to me.”

On Friday, Blocton had five challenges parked in front of his store. Among them was a 1998 Nissan sedan that needed new belts, a mid-1990s Chevrolet pickup waiting for an evaporator coil and a late model Honda Accord with brake issues.

Blocton said he’d like to have three to five cars on his lot at a time, but some days, that’s just not going to happen.

I would like to keep maybe three here at a time, but it’s hard to do that, because there is always somebody pulling one in with a new problem,” Blocton said.

Even as cars line up around his cinder block garage at the corner of Selma Avenue and Marie Foster Street, you won’t find Blocton taking notes to keep all the different tasks straight.

“I keep it in my head,” Blocton said. “People tell what they think needs done and checked, and I go from there. I just keep it all in my head and try to get their cars out the door as quick as I can.”

On Friday, Blocton struggled to name a brand of car he hasn’t worked on over the years. But, he says there are only two — Mercedes and BMW — he won’t work on.

“You’ve got to have special tools for those cars, and I haven’t tried to study up on those cars too much,” Blocton said. “They are a little more complicated than other cars.”

Along with his knowledge of most cars and a desire to learn something everyday about his work, Blocton said his ability to work with customers — no matter their attitude — has helped him make this skill his life’s work.

“In order to deal with people, you’ve got to be nice to them all,” Blocton said. “Some things you have to chew, when you want to spit on it.”

And now, as his hands ache constantly and his back is less forgiving after a day of hard work, Blocton said he still enjoys learning about the business.

‘The only way you can learn is to stay with it,” Blocton said. “For me, I feel like I lose something if I take a day or two away from the garage.”