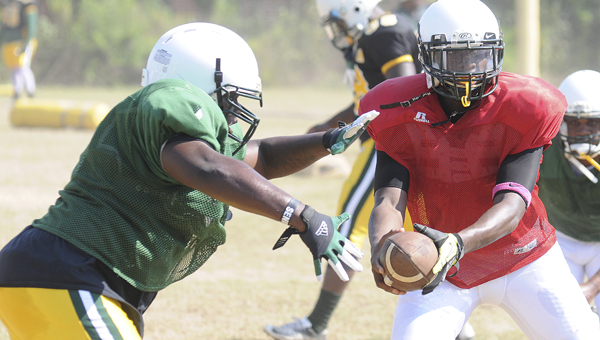 With its first game less than a month away, Concordia College Alabama still hasn’t decided on a starting quarterback.

Junior Andre Millet, redshirt freshman Aaron Pierce and true freshman Horatio Keller rotated snaps at Saturday’s practice, as Hornets head coach Stanley Conner continues to wait on one of the three to separate himself from the others.

“All of them are talented and all of them have the tools to play the position,” Conner said. “We just need some more reps.”

If the first game was tomorrow, Conner said Millet would have the upper hand based on experience, but the Hornets head coach is in no hurry to name a starter.

“Everybody else is going to feed off the quarterback,” Conner said. “If you have that person people gravitate to offensively — that they say ‘this guy is going to make something happen’ — then you go with that guy.”

Conner said all three quarterbacks can help the Hornets’ win games, but he’s looking at practices and scrimmages to see if one can get a leg up on the competition.

“Millet is the oldest, but Keller is the one who came on the scene last year from Augusta High School and did some tremendous things,” Conner said. “There’s a great upside to him.”

Conner said there is no timeline for him to name a starter, but he would like to have one in place before the Hornets’ opening game Sept. 6 at Arkansas Pine Bluff.

“Before the game, definitely we would want someone to step out,” Conner said.

“Going into that last week I definitely will declare a starter because that is the person that is going to be getting most of the reps.”

Even once a starter is name, Conner said the Hornets are expecting to play two quarterbacks because of their option-style of attack on offense.

The Hornets are expecting to play two quarterbacks because of their option offense, Conner said.

“We will definitely play two quarterbacks,” Conner said. “We are asking them to do too much to be able to play the whole game. Something is going to happen and they are going to get hit in a way where they have to come out of the game.”

Conner said all three guys — Millet, Pierce and Keller — are great athletes that are expected to contribute at wide receiver if they aren’t playing quarterback.

“Everybody needs to be ready to contribute,” Conner said. “It’s not going to be where just because they are a quarterback that can’t play in the field.”

The best thing about making predictions is that anyone can do it. We all love to be the guy who... read more