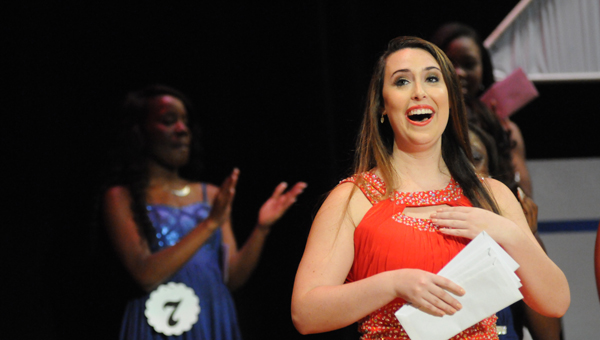 Barnes, who received a sizeable scholarship for her victory, was one of several high school seniors that walked away with scholarships or cash.

Surrounded by her competitors, as pageant winners were announced, Barnes reaction slowly shifted from surprise, to happiness and then pure jubilation as she celebrated with friends and family.

After snapping pictures and hugging friends, Barnes took a second to breathe and collect her thoughts.

“Is this real life,” Barnes recalled thinking as she was announced the winner. “I was taken completely by surprise. When I first got into it I was nervous and overwhelmed, but as it went on I realized that it was so much fun.”

Despite Barnes’ first-place award, Morgan Academy was the real winner, as all three of the top finishers were Senators. Hannah Creech was named first alternate and Maggie Jackson was the second alternate.

The competition ended in celebration, but only came after two hours of sweat, dancing, singing, piano playing and public speaking.

Girls were divided up into two groups for each portion of competition. The second group took center stage first during the fitness portion.

To get into tip-top shape, Barnes said she worked with a trainer specifically for Saturday’s competition.

Kay Sanford, a former winner of Dallas County’s Distinguished Young Women Competition, said the fitness competition presented a grueling and difficult challenge for all of the girls, but said it was a small part of the bevy of skills needed to win.

“It was one of the first experiences I had where it wasn’t about your looks or how you appeared,” Sanford said. “It was really about your scholastics, your brain, talent and all of the things coming together. When I went to state, I met some of my very best friends that I’ve kept for life.”

Though an interview and scholastic examination was held prior to Saturday night’s competition, contestants’ communication skills were tested during a self-expression portion.

The self-expression portion asked contestants to state a community organization that she would like to be a part of and explain how it would make a difference.

Some opted for a straight-forward answer, while others used an eloquent, metaphorical introduction for their organization choice.

During each portion of the competition, raucous cheers erupted from family members of participants. Though, the loudest section by far was the little sisters, who are juniors in high school and are paired with competitors.

Competition judge Ashley Turner agreed with Sanford, saying that intellect and poise were some of the most important considerations.

“It’s important that the girls can handle themselves well under these extremely anxious and pressurized situations,” Turner said.

Each competitor also showcased a skill. Some opted for tap dancing. Others opted for singing, a vocal presentation or piano. Barnes performed a jazz dance.

After she won, Barnes said she plans to attend Auburn University and major in English or literature.