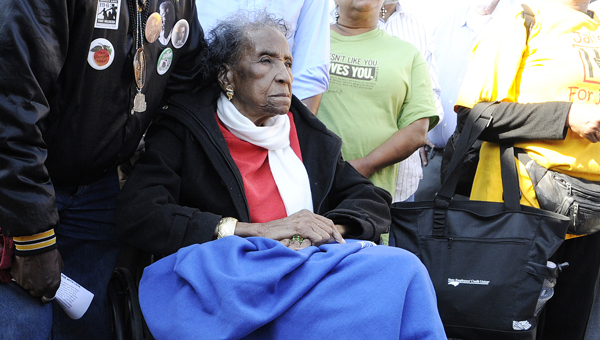 TUSKEGEE — Amelia Boynton­Robinson, the oldest of the surviving veterans of the 1965 Selma civil rights Movement, will celebrate her 103 birthday on Monday, Aug. 18.

Still completely mentally alert and combative, Boynton­Robinson has said that not only does she intend to attend the 50th anniversary commemoration of the passage of the Voting Rights Act this coming March 7, 2015, but says that “I might be at the 100th anniversary celebration as well. That’s how committed I am to the vote.”

Boynton­Robinson definitely holds the world record for number of consecutive years spent registering people to vote. She started with her mother, who took her in a horse and buggy through towns in Georgia to register people in 1920 — the year of the passage of the 19th Amendment that first gave women the right to vote. In 1964 she became the first woman to run for Congress in the state of Alabama.

This December, the Brad Pitt and Oprah Winfrey produced film “SELMA,” directed by Ava DuVernay, will remind America of the central role Boynton­Robinson played in American History. Acclaimed actress Lorraine Toussaint, who portrays Boynton Robinson in the film, recently visited her in the hospital upon completion of the film.

For those wanting to offer well-wishes to Boynton-Robinson on her birthday, can do so by visiting the Village of Hope Tuskegee Facebook page or on Twitter, using #HAPPY103AMELIA.