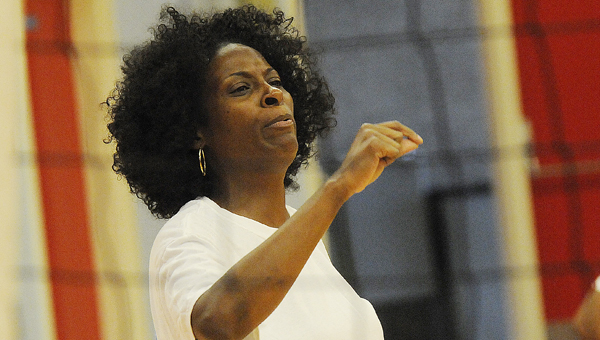 The players on the court change from year to year, but April Harper’s expectations do not.

Harper is preparing for her sixth season at the helm of Wallace Community College Selma’s volleyball program and although many of the faces on this year’s squad are new, she’s expecting great things from them.

“I expect to win every time we hit the floor,” Harper said. “Even with this being a young program, these girls have heart. They give it all they’ve got when they come out here and if they continue to do that, there’s no telling where they’re going to be.”

Since she coaches a junior college, Harper’s teams are always very young, but this year’s team will once again be made up of mostly freshmen. Seven of Wallace’s twelve players this season will be first year players.

“We have only been practicing for eight days,” Harper said. “We are trying to go over everything we need to go over as far as defense, offensive strategy and trying to mesh well together so we can have good chemistry when it is time for us to play on the 23rd.”

Harper said she expects her team to compete strongly in the Alabama Community College Conference, but she wants them to start with the fundamentals.

“They have been leading this young team, and they’ve done a great job of motivating them,” Harper said.

The Patriots open their season Aug. 23 in the second annual Patriots Classic, which will include eight teams. Along with WCCS, Concordia, Lawson State, Southern Union, Jeff Davis and Faulkner will be participating in this year’s tournament.

“We are going to play all day long,” Harper said. “We are inviting the community and all of the local high schools, public and private to come out and enjoy the tournament. It’s free of charge.”

Concordia College Alabama had a teriffic season last year, but did not get a chance to participate in the United States Collegiate Athletic Association’s national championship tournament.

The Hornets went 22-5 with a team of twelve freshmen, so head coach Brandon Reeves is expecting CCA to be competitive on a national stage once again.

“We are going to get to the national tournament this year — that’s my expecation,” Reeves said.

With so many young players on the roster, Reeves is likely to rely on big minutes from Ashley McGhee, the only senior on this year’s team. He’s also ready to see what 6’6” freshman Arieta Vaimaona, who is from American Samoa, can do on the floor.

No matter who finds their way into his rotation, Reeves wants to see his team finish games better than it did last season, when the inability to close the door on opponents plagued the Hornets.

“That’s going to be our biggest challenge this year.”

Concordia opens its season with a scrimmage at Wallace Community College Selma Aug. 23. Reeves said he is looking forward to seeing how his young team faces adversity.

“I really want to see them be tested,” Reeves said.

Concordia’s first home game of the year will be against Wallace Sept. 2 at 6:30 p.m.

Wallace Community College Selma pitcher Kevin Simmons was drafted by the Arizona Diamondbacks in the 16th round of the MLB... read more