The Dart: Brown’s family is always close at hand 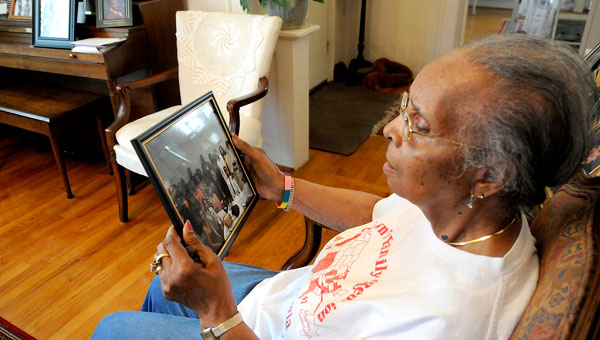 Crandell Brown views a framed photo from a family reunion, where serveal of her children, grandchildren, and great grandchildren were present. Brown said her family photos evoke sweet memories that make her appreciate how far her children have come. (Sarah Robinson | Times-Journal)

When Selma resident Crandell Brown wants to take a trip down memory lane, she just turns to one of many family photos covering her walls, propped up on her furniture or lying inside of her chest drawers.

Brown, 85, is the mother of five children, grandmother of eight and great grandmother of five, and she loves it. Most of her day is either spent speaking with one of her relatives or glancing at a photo of them, many of which reflecting their major accomplishments.

“The Lord has blessed me through my children,” Brown said. “They were able to accomplish things I couldn’t, because they were encouraged.”

Most have earned their college degrees, some have gone on to earn government jobs and some have raised their children to also reach their full potential.

Brown appreciates all her family has been able to do, because she lived through the Great Depression. Therefore her family’s main concern was surviving in life. She didn’t have the resources or encouragement to do much more.

Brown has sacrificed several material things to make sure her children could get the best out of life. She taught her daughters how to do a little bit of everything, like sew, type, music classes, dancing lessons and more, while her husband taught the boys some helpful traits.

Brown recently received a phone call from one of her daughters, telling Brown just how much she appreciates her teachings.

Because of the distance that separate them, Brown doesn’t get to see her children often, but they call enough that she isn’t left feeling lonely.

If she ever feels lonely, she has those photos close at hand.

“I was hoping for them as progressive as they could be,” Brown. “I’m glad they did.”