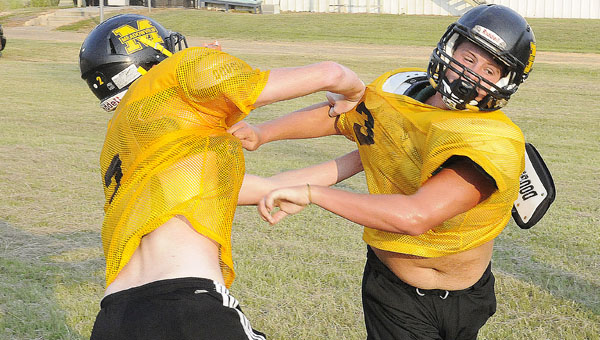 The jamboree will include four teams — Meadowview, New Life Christian, Ballard Christian,  East Memorial Christian — and will give the Trojans their first true look at 8-man football in the Alabama Christian Education Association’s sports league.  Meadowview will play two games, with the first starting at 6:30 p.m.

“You get tired of practicing after a while,” Meadowview head coach Lebo Jones said. “You want to see what you’ve got, especially with the same numbers we have. We can’t do a whole lot of full scrimmaging, so this will be a good opportunity for us to get a full scrimmage in before our first game next week.”

After a low turnout for the first week of practices, Meadowview has added around five players since school started Monday. Jones said Friday night is going to allow him a first look at a lot of the players that joined practices this week.

“I really want to see what we can do and who can do what,” Jones said. “I have a good idea of the guys who have played the last several years for me, but a lot of the new faces I want to see what they can do. It will be a learning curve for us.”

The jamboree carries even more significance because aside from a scrimmage that ended spring practices, this will be Meadowview’s first taste of 8-man football. The Trojans will see two teams that are on their schedule, New Life and East Memorial, at the jamboree, so Jones said a good showing is important.

“We are taking a very positive approach on it,” Stockman said. “We’ve picked up some new players and a lot of new faces, and I think this year we will be able to hold our own in this 8-man league.”

Stockman, who has been playing football since the fifth grade, said it will be bittersweet Friday when he begins his senior season.

“We’re ready to get out there and show everybody what we can do,” Stockman said.

Seth Granberry, left, and Bob Phillips played together Tuesday but still showed their allegiances to Alabama and Auburn.–Daniel Evans The... read more