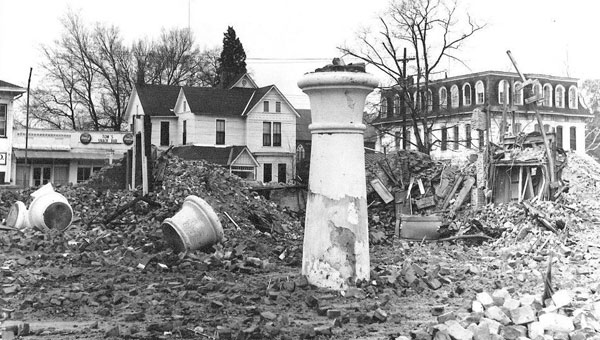 A single column stands in the middle of a field of rubble after Selma’s historic Hotel Albert was demolished. (Submitted photo | Times-Journal)

The juncture of Alabama Avenue and Broad Street is currently a spot for city councilmen and women to debate the future of Selma, but, at one point, the entire block was home to a group of historic, beautiful buildings — a hotel, the Wilby theater and a historic home.

Perhaps because the city is in the midst of restoring the St. James, the story of Hotel Albert is most interesting.

The Albert’s history dates back further than any Selma resident could possibly remember — 1854. At the time, the legislature chartered the Broad Street Hotel Company.

Initial attempts to construct the hotel fizzled out repeatedly, though it’s worth noting that an oft repeated Selma family’s name — James Lapsley — appears on a list of the hotel’s original commissioners.

The hotel’s original construction began in 1860 and ceased in 1861 because of the Civil War. When construction finally resumed in 1867, the first and second floor were completed, along with the building’s roof.

In 1868 the Selma City Council, perhaps in an effort to help The Albert financially, passed a measure to allow the hotel to pay half of its required taxes.

The city council helped again in the 1890s, when a group of stockholders called the Hotel Albert Company purchased the building. The council exempted the hotel from paying city taxes on bonds issued to finish and furnish The Albert.

The Albert was declared a showplace of the city. After all, it was modeled after the Palace of the Doges in Venice, Italy.

Without former city officials to stand and explain themselves, it’s unclear why the hotel was ultimately demolished in 1969, replaced with a solid block of government owned buildings. Gone is the Hotel Albert, replaced by city hall, the convention center and library.

Remaining residents of Selma from the time say the hotel’s destruction was mourned by many.

“Mom put us in the car one day and as we were driving by there, I saw a giant crane with a wrecking ball that was smashing the building and bricks were flying off,” said Robert Gordon, who owns an antique shop in the Old Town neighborhood. “People were just sick about the whole thing. There was so much speculation about why, but who knows why it really happened.”

One fact rings true in every account. The hotel was a masterpiece of architecture and design.

“It was just beautiful inside,” said Selma resident Christine Vaughn.

Vaughn’s description of the building included twin fireplaces and a large crystal chandelier surrounded by a circular balcony.

Vaughn said a group of Selma residents fought to preserve the hotel, but, as evident by the site’s current status, efforts were unsuccessful.

Though many of the building’s pieces were auctioned off, a few of the Albert’s white pillars still sit within Selma’s city limits, at the Vaughan-Smitherman Museum.

It’s an exciting time of year in Dallas County