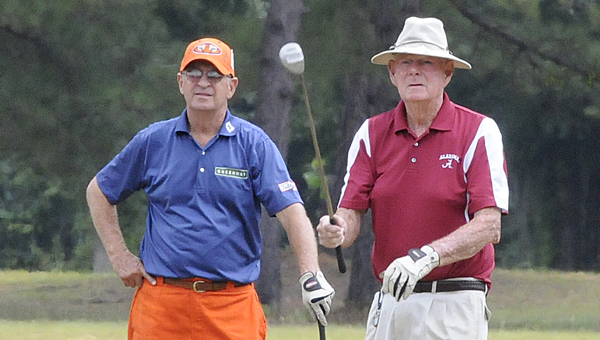 Seth Granberry, left, and Bob Phillips played together Tuesday but still showed their allegiances to Alabama and Auburn.–Daniel Evans

The 2014 Masters Games district nine tournament came to a close Tuesday afternoon at Valley Grande Golf Course, but not before the 21 players in the doubles championship shot some low scores.

Steve Smitherman and Gordon McLendon set the pace with an 11-under par 61, which was the best score of the day.  Smitherman and McLendon were the only golfers in the 55-59 age group, so they were guaranteed to win their age bracket, but they also blew away the field by three shots.

“It was really back and forth today,” Smitherman said. “I had a pretty good round on the backside, and Gordon was a little better on the front than I was. We kind of offset each other.”

The duo made seven consecutive threes to start the back nine, which ignited their day and helped them got to a blistering start before making the turn. The 29 Smitherman and McLendon shot on the back nine was the best score on the course by four shots. With both players routinely hitting tee shots in the fairway and Smitherman nailing putts, they made the course look easy.

“Steve made some of the hardest putts that I’ve ever seen,” McLendon said. “We were on the wrong side of the hole, downhill and he made some putts that shouldn’t have been made. They weren’t that long but they were just that hard.”

Tommy Irvine and Tommy Hatchett shot an 8-under 64 for the second best score of the day. Irvine and Hatchett won the 65-69 age group by one shot over the pairing of Ray Hollingshead and Yank Cargill.

Steve Schmitt and Bill Ledbetter shot 66 to win the 60-64 age division by three shots over Steve Spivey and Andrew Simmons.

Jesse Harris and Mason Harris shot 69 and won the 70-74 age group in a tiebreaker over Seth Granberry and Bob Phillips.

The difference ended up being that the Harris team made eagle on 17, while Granberry and Phillips made birdie.

Neal Hedo and Kerwin Varso shot 73 to win the 75-79 age group. Wayne Robinson won the 80-84 age group with a 78. Robinson played two balls on every hole so that he could participate, because the tournament had an odd number of 21 golfers.