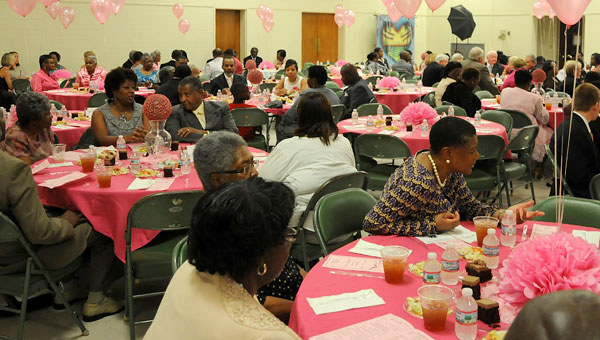 A large crowd was on hand for the Gala in Pink ball held Saturday in the Selma Convention Center. (Sarah Robinson | Times-Journal)

Hundreds of guests appeared at the Selma Convention Saturday, most in pink attire, to support the Gala in Pink ball.

Designed to support the fight against cancer, the proceeds from the event will be donated to the American Cancer Society, a nationwide organization dedicated to eliminating cancer.

“I’m just so thankful that we mix of people from all over the community,” event organizer Jewel Thornton said.

Among the guests were Selma Mayor George Evans and Selma Chief of Police William Riley.

The ball kicked off with a speech from Thornton, who told the crowd how her personal encounter with cancer initiated her long-time vision to create the Gala In Pink event.

Thornton talked about how her daughter’s 2009 cancer diagnosis led to her researching the disease and learning that it is extremely prevalent across the nation, especially in the Dallas County area.

She told her guests the event had the power to unite Selma, while battling an illness that has affected so many across the country.

“We want to celebrate, tonight, the hope of a cancer-free world,” Thornton said. “Doesn’t that sound good?”

Later, guests were served a dinner, cancer survivors were given a bag of prizes donated by the American Cancer Society, and a silent auction was held.

When Wetumpka resident Elaine Lewis received an invite to attend the ball, she said she didn’t hesitate to accept it. Lewis said it was important she support Gala in Pink, because she has friends and family who have battled cancer.

“I wanted to come out and support through the project,” Lewis said. “This is an excellent thing that does a lot of good work, and I just wanted to be a part of it.”

Brenda Purifoy wipes down a table at the Sandbar restaurant Friday afternoon. The restaurant is scheduled to reopen for business... read more