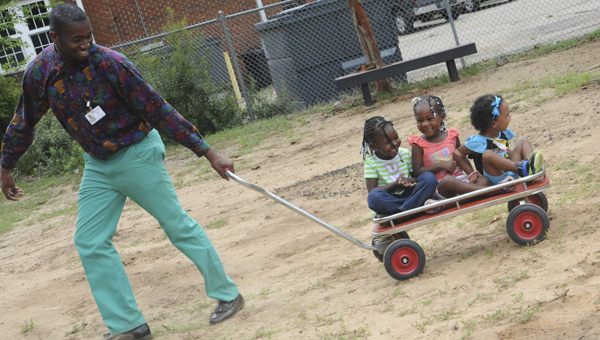 Ceiling titles and carpets have been replaced, the air has been freshened and mold inspection has been conducted in preparation for the schools’ first school year. The summer-long moving process largely included shifting Byrd’s furniture to Knox Elementary and furniture from other preschools to the center.

Some of the few teachers are still putting the finishing touches on their rooms this week.

“It’s actually gone smoother than I expected,” DiChiara said. “I was thinking there were going to be a lot of parking issues for parents having to bring their children, but we did a couple of things.”

To prevent traffic jams, DiChiara said the school has one group of classes start at 7:45 a.m., and the other group start at 8:15 a.m. The group assigned to arrive at school 30 minutes after the first will also leave 30 minutes following the first group’s departure, DiChiara said.

Also, the teachers were asked to park at a vacant parking lot, located on Furniss Avenue, owned by Circle of Love.

DiChiara volunteered to drive teachers to and from there parked cars this week, Next week, teachers will be able to park closer to the school.

“We wanted parents to be able to come to the building and have a place to park,” DiChiara said.

After speaking with The Head Start Program, Selma City Schools learned the proper steps to approve its suggestion of curbside service.

“Instead of having [guardians] get out of their car and walk children into classroom, they are now going to be able to drop the children off at the curbside,” DiChiara said.

“We’re going to be able to take them into their classroom.”

The playground equipment meant for elementary-aged students was removed, and plans to replace it with equipment safe for preschool children are underway.

The Head Start Program has provided the children with toys, such as tricycles, wagons, and basketball goals, for the kids to play with while until the new play set is put in place.

McCall said one of the biggest differences between teaching at the elementary and a preschool is the instructing style.

“We give the kids an opportunity and time to do things,” McCall said. “Beforehand, it was more teacher-directed, now it’s more child-centered.”

“You’re going to see some things wonderful take place there,” DiChiara said. “When you take three entities like Head Start, our school district and the Office of School Readiness being able to partner together and pull our resources, you’re going to be able to do some great stuff.”

James Howard was honored recently for his careeer with the United State Postal Service, during which he has worked as... read more