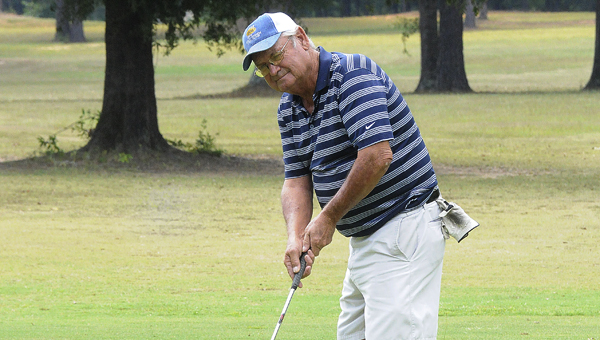 Ray Hollingshead putts for birdie on the 18th hole during the singles competition of the 2014 Masters Games golf touranment at Valley Grande Golf Course. Hollingshead shot 72 and finished second in the 65-69 age group.–Daniel Evans

Jesse Harris lit up the front nine Monday to win the overall singles competition at the 2014 Masters Games district tournament.

Harris shot the best round of the day Monday, a 2 under 70, to set the pace for the singles competition at Valley Grande Golf Course. The tournament is set up so golfers 50 and above compete against other players in their age group. Harris won the 70-74 age group by twelve shots over Johnny Moss.

He said the key was taking advantage of the easier front nine and keeping it together on the back nine, which is where he started his day.

“I was real lucky to shoot even on the back side and got in some good birdies on the front side,” Harris said.

This was his seventh time playing in the Masters Games, which is a non-profit organization that promotes active lifestyles for those 50-and-older.

“I try to make it out here every year because it is a great tournament,” Harris said. “I just wish we had more players that were playing in it.”

The field for this year’s event included 24 golfers. Most years the tournament includes around 35 players, tournament organizer Elton Reece said.

Even a larger field might have had a difficult time catching Harris.

Harris knocked in birdies at three, six and seven as he blazed through the front nine to set the scoring pace.

Harris’ approach on the sixth was the closest of the day, as he left himself about five feet for birdie. Once he knocked that in, he kept the momentum going with a birdie at seven to get to 3 under.

He finished with a bogey on his final hole of the day, the ninth — often referred to as the toughest hole at Valley Grande Golf Course — but was still a shot better than the rest of the field.

“The front side is the side you have to score on out here,” Harris said. “The back side will eat your lunch if you don’t watch out.”

Albert Southall shot a 71 to edge Ray Hollingshead by one shot for the 65-69 title. Southall’s 71 included an eagle on the eighth hole. He also made birdies on  two, seventeen and eighteen.

“I was putting good and hitting my driver off the tee,” Southall said. “Starting good and ending good. Everything else was mediocre.”

Southall said he was using a brand new putter for the first time Monday. After the way he putted, Southall said he is planning to keep it in his golf bag for a long time.

The 80-84 age group was won by John Lovett, who shot 72 to beat  second place Bob Phillips by six shots.

Steve Schmitt won the 60-64 age group with a 75, which was eight shots better than Steve Spivey.

Steve Smitherman was the only players in the 55-59 age group and he shot 78.

On Tuesday, the doubles competition will be held at Valley Grande Golf Course.

This year’s Masters Games state tournament will be held in Oxford, Ala. Oct. 6-7.

This should be a fun football season in Dallas County

High school football season is finally back, as practices started this past week around Dallas County. I made my own... read more