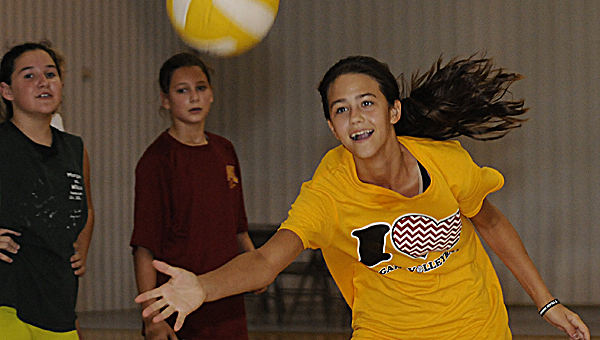 Morgan Academy’s Regan Hewitt chases after the volleyball during Thursday’s practice at the school. Hewitt, a freshman, and the Senators are preparing to open their season Wednesday at Tuscaloosa Academy. –Daniel Evans

Dana Bohannon took over as Morgan Academy’s volleyball only a month ago, but she can already see the difference between where the Senators were then and where there are now.

Morgan Academy opens its season Wednesday at Tuscaloosa Academy, a team that spent a large portion of the 2013 season ranked in the Alabama Sports Writers Association top 10 poll.

“They’ve come a long way,” Bohannon said. “We’ve been to camp at UAB, and we were competitive. We even scrimmaged Meadowview and lost, but it was an improvement.”

The Senators took the Trojans — who made the AISA Class A quarterfinals last season — to five sets in last Friday’s scrimmage game, but came up just a bit short. The game, which was seen as a tune-up for each side, gave Bohannon another chance to evaluate where her team is going into the season.

The team had a retreat last week, which allowed all of the girls to get to know each other before the season gets going.

Bohannon said getting everyone on the same page is a key to having a successful season.

“We didn’t have a lot of unity last year between the older girls and the younger girls,” Bohannon said. “Now, you really can’t tell which ones are varsity and which ones are junior varsity. In order to build a program, that’s what I thought was important.”

At this point, she sees team unity and conditioning as the Senators’ biggest strength.

“It’s our teamwork,” Bohannon said. “We are pretty scrappy. We aren’t strong, but we are in shape.”

Morgan Academy plays its first home game of the season Aug. 18 against the same Tuscsaloosa team it faces in its opener.

The Senators play three of their first four games on the road, but then play their next six at home.