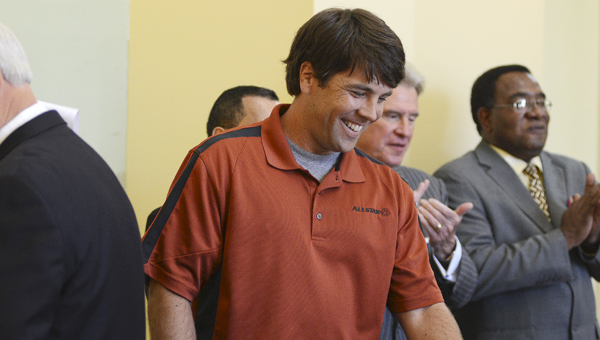 A former major league baseball player is teaming up with the largest employer in Dallas County to help recycle industrial waste.

Selma and Dallas County officials announced Friday that Allstar Recycling — based in north Alabama — would be opening a plant to service International Paper’s Riverdale Mill.

Allstar owner Ashley Freeman is a Muscle Shoals native who played baseball for Vanderbilt University and later the Colorado Rockies.

Freeman said he always had an interest in business. When he left the major leagues because of injury in 2006, Freeman said he began a recycling business in the Muscle Shoals area. Freeman said he recycled products for International Paper’s Cortland Mill.

“It was at the time when the green movement was just getting started and, in Muscle Shoals, there was really no one else,” Freeman said. “We strive to create a sustainable environment by reducing, reusing and recycling waste. We believe that it is our responsibility to take care of what the Lord has given us, and we try to accomplish this by reducing the amount of reusable solid waste entering coordinator, said a lot of the confusion comes from the “sell by” label.

“Most people think that if it says “sale by” that it is no longer good and that you shouldn’t buy it,” Nelson said. “It doesn’t mean it’s not good. It just means the store can no longer sell it and guarantee its freshness.”

Nelson said most food bought on the sell by date needs to be used within two to three days, especially if it is a meat.

The “best if used by” label has nothing to do with food safety. Instead, it refers to when the food will be at its peak quality and freshness, although Nelson said it would not typically spoil.

“Those things don’t really expire,” Nelson said. “They will never get will they will poison you, like cereal or macaroni and rice. That stuff will last forever. It may not taste the best, because the flavor won’t get off but it will not spoil.”

The survey by NSF International said that 51 percent of those polled throw out food based on the “best if used by” date, which results in a lot of food being wasted each year.

Dave Oliver, owner of Dave’s Market in Valley Grande, said he stresses every day to the store’s employees how important keeping track of expiration dates is. He has been in the grocery store business for over 40 years, so he has witnessed first hand how expiration labels have been implemented through the years.

“They are getting tougher on dates,” Oliver said. “Everything is dated now, except for the non-food stuff. Baby food and WIC items, they check you. You’ve got the county health inspector and state inspector checking you. You have to stress dates.”