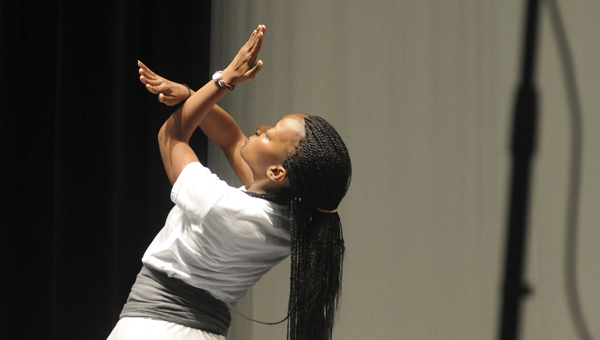 School starts Monday for both area public school systems students, but the celebration for the new school year has already begun.

Selma City and Dallas County School Systems held individual institute programs Thursday, inviting its employees to a program filled with entertainment and information about plans for the upcoming year.

The Selma City Schools’ kicked off its event with a praise and worship service, featuring performances from representatives of area ministries.

“It was basically to say to the teachers, ‘You have been given a gift. Let’s count our blessings,’” DiChiara said. “It never hurts to start the year off with something that is spiritual or inspirational to get us in the right frame of mind as to why we’re here and what our responsibility is.”

James Perkins Jr. served as the moderator, while Reginald Wells delivered a prayer in coordination with the praise and worship portion.

In between prayers, there were praise dances, mime ministry and musical performances, with Shiloh Baptist Church praise dancer Marrisa Moore and Potter’s Place mime artist Rashad Presley among the many to perform.

Seventh grade math teacher Jasmine Parker is days away from teaching her first group of Selma City School students. So for her, the celebration was a great opportunity for her to grow closer with her new co-workers and the general public.

“It’s inviting,” Parker said. “Everybody is pretty nice, and it gives me a chance to get to know a lot of people, since I’m new to the area.”

After the celebration portion, DiChiara discussed the past, present and future of the city school district.

Using a PowerPoint, the state intervention leader presented plans to help the school district meet a standard of excellence.

To reach those goals, DiChiara said he would like to conduct a math tournament with fifth and sixth grade participants, expand the gifted program and its services, construct a requirement for community service and graduation and much more.

“You’re here for a reason,” DiChiara said to the crowd. “I’m extremely proud to be your biggest cheerleader. I appreciate what you do for the children, and I hope you have a great year.”

Dallas County Schools’ began the program with Disney songs to brighten up the mood and set a magical atmosphere for magician Gary Ledbetter to wow the crow as the main performer, Willingham said.

Ledbetter executed some mind-reading tricks with administrators that often left the audience smiling, laughing and cheering.

Moments before the morning ceremony ended, Willingham announced that the board is in the process of filling four remaining positions.

Sowers selected as Artist of the Month

Throughout his professional career, Jay Sowers has viewed the world around him through the small viewfinder of his camera.  From... read more