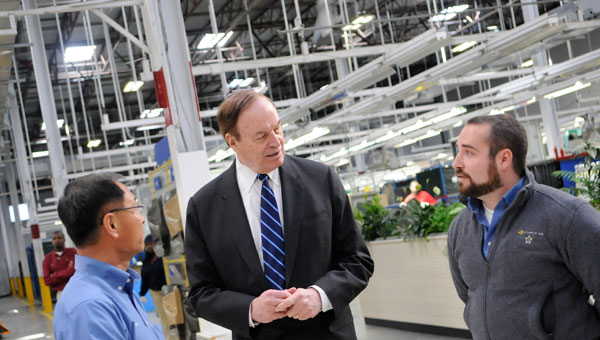 Two local automotive suppliers are reporting an increase in hiring in recent months.

Honda Lock, located in west Selma reported the largest increase in hiring over the past year. Honda Lock human resources manager Loren Allday said the company’s total number of employees increased by 51 from in the previous year. Hanil E Hwa, which makes car parts on Craig Field for Hyundai hired an additional 20 to 30 temporary employees in 2013 to help with the company’s rollout of new car models, spokesperson Jay Ahn said.

Selma economic development director Wayne Vardaman said the news is a sign of an overall uptick in Alabama’s automotive industry.

“A rising tide floats all boats,” Vardaman said. “We certainly want the mother companies to see growth, so we can grow locally. It’s an evolving industry in Dallas County.”

Vardaman described the overall automotive industry, which represents 900 to 1,000 jobs locally, as ranking among the top few business sectors in Dallas County.

Alabama’s auto manufacturing industry was also recognized nationwide recently by Business Facilities magazine, which is based in New Jersey.

In its 2014 rankings report, the magazine cited accelerated job growth and production gains as reasons for the state’s first overall ranking in automotive manufacturing strength.

“We have targeted advance manufacturing, because it produces high-wage jobs and because Alabama has a long history of making world-class products with consumer and industrial applications,” Canfield said in a news release.

Dallas County’s local growth also reflects a statewide trend, according to the Department of Commerce’s release. It said automakers added a total of 2,300 new jobs between June 2013 and June 2014. A total of 915,000 vehicles were produced in the state in 2013, according to the release.

The hiring frenzy could continue into late 2014, according to Allday and Ahn.

“The increase represents a combination of increased product output due to increased sales and new product lines,” she said. “It has been a very busy year for us and we continue to look forward to new opportunities in the future for Honda Lock.”

Ahn said Hanil E Hwa doesn’t have any firm plans to begin hiring more personnel, but could add to its total number of employees if sales and demand increases.

Vardaman said he was unsure of the overall percentage of the new workers from Dallas County, but regardless the employment increase is good news.