Bears getting ready for football opener 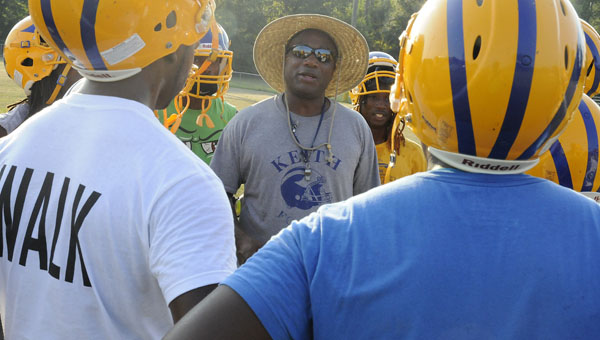 There were only 18 players at Keith’s football practice Wednesday, but head coach Harry Crum isn’t worried.

Crum, who is entering his 17th season coaching at Keith, knows he will have an influx of football players when school starts back next week.

“I know, as is tradition, we will get more when school starts,” Crum said. “In a rural area, that’s just the reality of life.”

Even with the low numbers, the Bears were hard at work Wednesday. Keith spent some time going over special teams early in practice, because their jamboree game versus Autaguaville Aug. 22 will feature live special teams.

“This week we are primarily focused on offense and special teams,” Crum said. “We look at alignment as far as defense is concerned and being where you are supposed to be. Being in the right alignment, knowing your assignment and knowing your keys — all that is great — but when you get there you have to hit somebody, and we can’t really work on that until next week.”

After three days without pads, Crum plans to put his team in shoulder pads for Thursday’s practice.

The biggest challenge this fall is for the Bears to find a starting quarterback. Maurice Crumpton, who has led the Bears offense the last three years, graduated in the spring and is playing at Stillman College.

Crumpton scored 72 touchdowns in his career, so his departure left a large void for Keith to fill.

“We lost Maurice, so whoever takes a snap under center this year will be new to that position as far as starting,” Crum said. “We have people that have some experience from the spring, my son Brian Crum, President Hasberry and Deanthony Griffin.”

Crum isn’t ready to announce which player will start, but is not against a quarterback by committee approach, if that’s what he feels puts Keith in the best situation to be successful.

It does help that nearly every player at practice Wednesday has played for the Bears in the past.

Keith’s Wing-T offense is confusing for opponents, but players that have been in the offense for a while usually have the base set of plays down.

The power running offense has been the key during Keith’s run of six consecutive playoff appearances.

Crum said he hopes to have the entire offense and defense in by the time the Bears play their jamboree contest.

The Bears open their regular season versus rival Southside Aug. 29.

Field at CCA not ready for football games yet

Concordia College Alabama will play its three home games at Memorial Stadium this season. The college had hoped the use... read more