Field at CCA not ready for football games yet 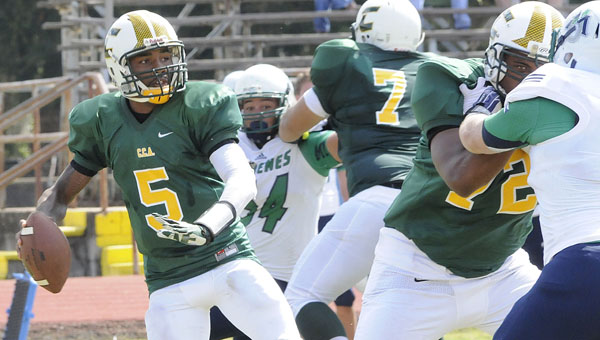 Concordia College Alabama will play its three home games at Memorial Stadium this season. The college had hoped the use the college’s new on-campus soccer field as a place to play its home football games this year, but the cost of equipment has delayed that move.–File Photo

The college had hoped to play football games on the new field, which opened last year, but athletic director Frankie Peoples said the cost of equipment prevented that from happening for the 2014-2015 season.

Earlier this year, Peoples said he was planning for the football team to play its home games on the campus’ field this season. On Tuesday, he said at that time he didn’t realize all of the expenses standing in the way of that move taking place.

“All of last year, they did not even attempt to use it,” Peoples said of the field. “My thinking was to try to stir it up and see which direction we could go, but once I started stirring it up I realized there is a lot of things and a lot of money to get it to be satisfactory to what we want.”

Peoples said the college would need to add a press box, install goal posts and get at least one more set of bleachers to get the seating capacity to around 1,000 in order to play games on the home field.

“We have a large set of bleachers on one side and on the other side we have a smaller set,” Peoples said. “Trying to get seating capacity for the students and the city, we probably need 150 more [to get to around] 1,000. That’s my thinking.”

The field, which is currently used primarly as a soccer field, does not have adequate restroom facilities either, Peoples said.

“That’s what it really is, a soccer field,” Peoples said. “We are just trying to get dual use out of it.”

Concordia has had attendance issues at football games the last few seasons, which is a problem Peoples acknowledged previously. He said playing football games on campus would help cure that issue.

“Really what we were trying to do is involve the student body more.” Peoples said. “[With students] being closer, they would probably walk across there and be at the game.”

Peoples is not sure of the total cost of the project, but he’s hoping to get some help from local contractors and local businesses when it comes to lowering the cost.

This season the Hornets will play their three home games at Memorial Stadium — the sight where Concordia has regularly played its football games for years.

While the football team will not play on the campus’ field this fall, the soccer team will use it for the second consecutive year. The Hornets are scheduled to play six home soccer games there this season, including the opener against Johnson and Wales Florida Aug. 22.