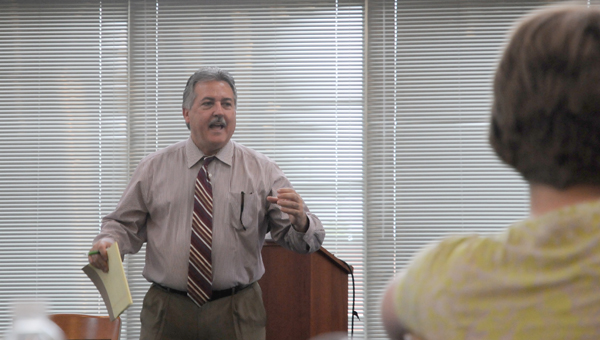 With only a few days left until local, public schools resume classes, faculty and students alike are in the midst of final preparations for a productive year.

A total of 31 new teachers gathered in Selma High’s library on Tuesday for the second day of orientation after spending the first day listening to basic, policy-centered presentations.

The second day’s presentations included, among other topics, lessons on understating poverty and strategic planning.

With less than a week left until the first day of school, Selma High principal Aubrey Larkin said the final days are an exciting time.

“It’s just a very busy time, with the hustle and bustle of things,” Larkin said. “Everybody is just excited about the changes that are occurring within our district and our school. We’re just ready to get started.”

The 2014-2015 year marks the first, full school year under the state intervention, which was approved in January. Acting superintendent Larry DiCihiara said many of the major challenges to improve the system have already been accomplished.

“I’m a new superintendent in a new school district, starting fresh, and to me it’s just been positive and exciting,” he said. “We now have double the resources — the people that are already here in the district plus the state department and my intervention team. This school system is just immersed with incredibly talented administrators that go along with the good teachers we already have.”

DiChiara said one major challenge for the Selma City System is sustaining high quality leadership through the intervention team’s stay, but also after its exit.

The Selma City System will have its registration for all grades on Friday.

Several miles away, the Southside Panthers were also gearing up for the coming school year, with a freshman orientation.

Students and parents were largely quiet during the presentation, but audibly groaned during talk of the school’s dress code.

Southside principal Clarence Jackson lightened the mood when talking about schedules, which include short breaks between each class..

“We didn’t put any time in for you to walk Nene, Leroy or anyone else to class,” Jackson joked.

Jackson also announced that Southside would serve free lunch and breakfast to all students, which drew cheers and applause. He said free breakfast and lunch applies to all county high schools.

“The Black Belt is known for being a poor area,” he said after the orientation. “So the free meals are just one less worry parents have to deal with.”

When school starts on Monday, Jackson said he would be looking forward to the beginning of a productive year.

“If we get the students here, we are going to add rigor and ask them to step it up,” he said. “We want them to be prepared for whatever they choose, whether it’s a technical college, four year college or introductory class for remediation.”

Selma resident Clarence Strong looks over a basket of fresh tomatoes while waiting for customers Monday morning near his truck,... read more