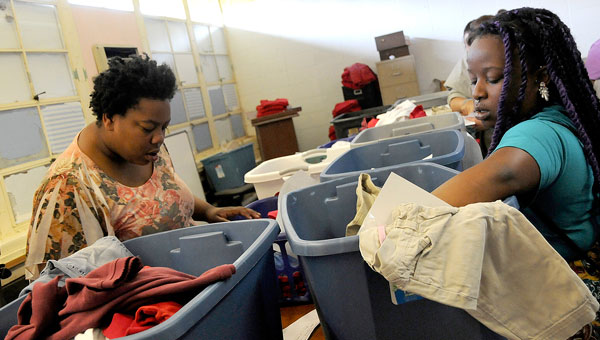 Several parents left the Phoenix Alternative Program Monday morning free of the financial stress of having to purchase school uniforms.

“It’s important, because a lot kids sometimes tell me when being truant from school that they don’t have the proper school uniforms to wear,” Capers said. “With the idea between Selma City Schools and Wallace Community College, we came up with the uniform drive.”

About two weeks before the school year ended, boxes were placed outside of the city schools, which all have a separate uniform dress code. Students were encouraged to donate their used uniforms in return for five points additional toward their lowest grade.

Some of the uniforms were brand new, purchased with some financial support from State Rep. Darrio Melton, D-Selma.

The average amount collected each year, which is about 1,000 uniform clothing items, can dress about 25 percent of the student population in the Selma City School System.

Selma resident Yvette Bethel has benefited from the Uniform Drive since it first began. She collects uniforms for her three grandchildren who attend Payne Elementary School.

“If you have a lot of bills and stuff and the mom doesn’t work anywhere, it helps that way,” Bethel said. “It really helps the low-income families.”

Each parent — or guardian — who entered the event was given a slip requesting the child’s information, such as name, sex and size. Those slips were then given to the volunteers responsible for filling out the orders.

Every child was allowed one set of uniform clothes.

As they waited on uniforms, guardians had a chance to visit a WCCS workshop held at Phoenix Alternative Program where WCCS representatives introduced their programs.

“This year we decided to make it a resource fair, so to speak,” Pettway said. “We realize that’s very close to school starting, but there are a lot of other options we feel that people can take advantage of, such as our Ready-to-work Program.”

The wait continues. Citizens and city council members of Uniontown will have to wait a few more days before they... read more