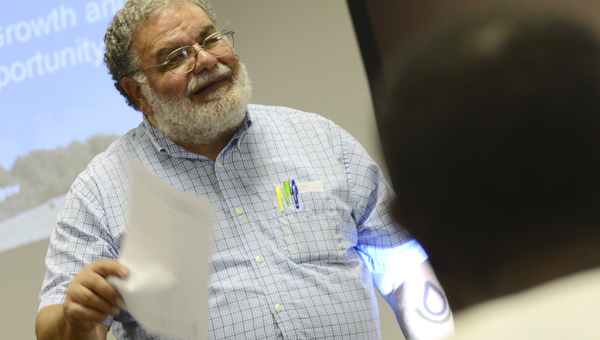 It’s hard enough to be a farmer, but it is made even more difficult if one is not aware of the financial assistance they could be getting from federal programs.

Thursday evening, the Alabama StrikeForce Initiative for Rural Growth and Opportunity held a meeting in Selma to spread the word about programs available to farmers from the United States Department of Agriculture.

“The StrikeForce Initiative is trying to increase participation in these programs across 24 counties in Alabama, including Dallas County,” said Luis Cruz-Arroyo, resource conservationist with the USDA’s Natural Resources Conservation Service. “Even if we only have a couple farmers here tonight, the main goal of this initiative is to spread the word about USDA programs and how they can help people out with their farms or houses.”

The meeting, which was attended by roughly half-a-dozen farmers from Dallas and surrounding counties, featured speakers who discussed numerous USDA programs. Among the programs discussed were ones designed to assist farmers with the costs of home repair, irrigation installation and forestry programs.

The StrikeForce Initiative, which now includes portions of 16 states, was started by U.S. Department of Agriculture Secretary Tom Vilsack in 2010, and came to Alabama in 2013.

The vast majority of the 24 counties included in Alabama’s StrikeForce region are located in the Black Belt, along the U.S. Highway 80 corridor.

John Zippert, director of program operations for the Federation of Southern Cooperatives Land Assistance Fund, said these counties were selected because of the economic need shared by many residents living therein.

Zippert  said  FCS  has agreed to host more outreach meetings so Black Belt residents can learn first-hand about the programs available to them.

“Obviously, we don’t have everybody here tonight who needs these programs, but we hope everyone who is here can spread the word,” Zippert said.

Zippert said FCS employees are determined to continue to spread the word about the available programs, regardless of the questions or doubts –

“We are willing to come to your home and help you, and hold your hand,” Zippert said.

“We are serious about this.”

By Scottie Brown The Selma Times-Journal   Eighteen high school senior girls in Dallas County will get the chance to... read more