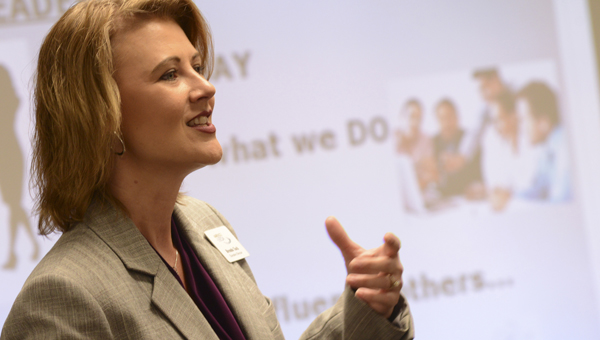 Class is officially in session for the newest members of Leadership Selma-Dallas County.

The 21 members of Class XXI gathered together for the first time Thursday morning at Vaughan Regional Medical Center, before leaving town for a two-day retreat, during which they will focus on getting to know each other.

“The idea behind this weekend is to come together as a class, and to start that process,” said Times-Journal editor Tim Reeves, himself a member of Class XVIII and president of the Leadership Selma-Dallas County Board of Directors. “Don’t stick against the wall and just watch this weekend, because that is not the mentality. Do. Volunteer. Get out in front, and have fun.”

Briana Westry, a member of Class XXI, said she was excited for the opportunity to interact with her new classmates and other community members over the coming months.

“I’m very shy, and I think this class will give me an opportunity to meet a lot of leaders of the Dallas County area,” Westry said. “I’m looking to build new relationships and build on those so we can all bring something new and special to Dallas County.”

After the retreat, the class will meet on the second Thursday of each month through May 2015 and learn about different aspects of the community including agriculture, economic development and criminal justice.

Callie Nelson, interim director of Leadership Selma-Dallas County said she believes the members of Class XXI are capable of doing great things for their community.

“This is a really unique group,” Nelson said. “When I went through and read their applications and saw why they wanted to be in Leadership, what they want to get from the program, and how they want to come back and serve their community, I was really excited.”

Nelson said the members of Class XXI would have a better understanding of their community after completing the course.

“After they spend a year looking at this area as a community and learning about Selma’s strengths and weaknesses, they will be able to help the entire community grow and move forward,” Nelson said.

Reeves said it is now up to the class members to make the most of this opportunity.

“The classes before you have had tremendous potential, and they’ve gone on to do great things,” Reeves said. “There are some classes to be inspired from.”

Gala set for next Saturday

After months of anticipation, Selma resident Jewel Thornton is a week away from realizing her dream for a better Selma. ... read more