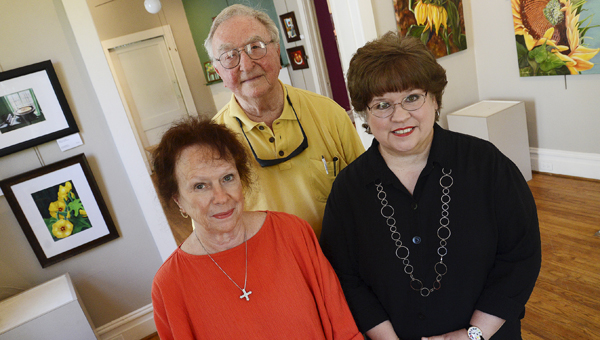 The Selma Art Guild celebrated a special anniversary this week.

July 31 marked twenty years since the group hosted its first art show at its permanent gallery at 508 Selma Avenue. Cam Guarina, who was among the group that helped move the guild into its current location in 1994, said it was a big deal for the club to reach this milestone.

“It means we are doing something for the community,” Guarino said. “It means that we have a presence in the community and that people are interested in these local artists.”

Before the building was donated to the art guild by the family of its previous owners, Charles and Alice Hohenberg, meetings were held at various locations around Selma.

Shirley Quarles Baird, also a charter member of the guild that formed in 1970, said the welcoming personalities of the artists and members have made the guild as strong as it is today.

“The artists here just hang together,” Baird said. “People that are just starting out get encouragement from the more-established artists here at the gallery. We really like each other, and it is not a competitive group.”

Art guild member Roy Childers also said the groups’ success and longevity could be directly tied to the friendly atmosphere.

“A lot of people are timid about showing their works for the first time, but you really don’t see that here,” Childers said.

Baird said she takes great pride in not only the hospitable environment for artists at the art guild, but also the variety the talents that have been displayed there over the years.

The Selma Art Guild Gallery hosts monthly art shows with featured artists, along with a juried show every summer.

Over the years, the gallery has been host to art history lectures, workshops, classes, demonstrations, fundraiser dinners, student art shows and other art related projects.

Even as the guild celebrates 20 years in its Selma Avenue location, Guarino said the group is focused on the future.

“We have a lot of things on the horizon,” Guarino said. “I can’t tell you what they are just yet, but I can say that when we have our monthly meetings, we are already making plans six months out.”

The Dart: Sherrer shares her love of the game