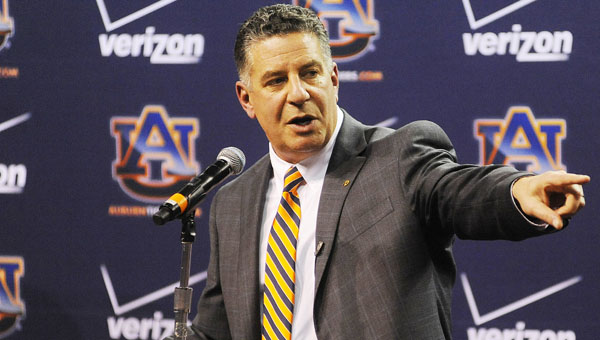 Auburn University head basketball coach Bruce Pearl headlines a list of speakers that will speak at Selma Quarterback Club meetings this year. Pearl will speak Dec. 8, which is the last meeting of the year.–Zach Bland | Auburn University

The Selma Quarterback club is all about football, but its headline speaker this year is one of the nation’s most charismatic basketball coaches.

Auburn head basketball coach Bruce Pearl will speak to the club Dec. 8, which is the last meeting of the year.

“We felt like even though it is a football club, Bruce Pearl is a tremendous name and a former national coach of the year twice, so what more can you ask for?” said W. Forrest Hatfield, who serves on the board of the quarterback club and is also the program chairman. “We are into basketball season by that time as well as football season.”

Pearl, who accepted the Tigers’ basketball position in March, should be able to provide great insight on his team by early December, because Auburn’s season will already be under way.

“We didn’t know what our odds would be to get him, because it is hard to get SEC coaches frankly — football, basketball, anything, particularly during the season.,” said Hatfield. “It’s almost unheard of, but we thought we’d give it a try.”

Although he may be the biggest name, Pearl isn’t the only well-known speaker in this year’s lineup.

Tony Barnhart, who has his own television show on CBS Sports Network and hosts an afternoon radio show on Atlanta’s 790 the Zone, will be the speaker on father and son/daughter night Sept. 29.

“You never know how speakers are going to talk, but we know Barnhart is an outstanding guy and a straight shooter,” Hatfield said. “We thought he would be ideal [for that night].”

The quarterback club kicks off its 2014 season Aug. 25 at Julius Talton’s river house, which is five days before Alabama and Auburn start their football seasons.

Ryan Fowler, who hosts a sports talk radio show in Tuscaloosa, and Jason Caldwell, associate editor of Inside the Auburn Tigers, will speak at the first meeting to give fans an early perspective on both the Tide and Tigers.

Major Ogilvie, who played running back at Alabama in the 1980s, is the speaker Sept. 8. Tom Banks, who was an all-SEC center at Auburn in the 1960s, will speak to the club Sept. 15.

The quarterback club gives out four, $4000 scholarships each year to candidates that best meet the club’s selection criteria — which are academics, participation in school and community activities and financial need. All applicants must also have played high school football.

“I think this year is a great year,” Hatfield said. “We have been very fortunate. Things kind of fell in place for us and we have some really outstanding speakers this year.”

The club meets on Mondays, with several off weeks during the year.

All eight meetings this year will include dinner.

Anyone interested in joining the quarterback club can pick up an application at Selma Trophy, Selmont Service Center or by emailing Hatfield at wfh63@bellsouth.net.

File Photo | Times-Journaleyes on the prize: This alligator head greeted hunters as they went into an alligator hunting meeting... read more