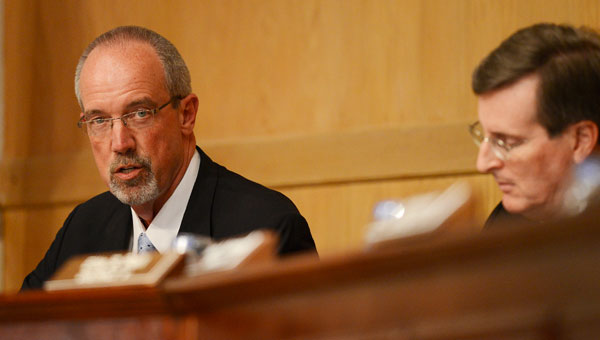 High Marks: State Superintendent of Education Dr. Tommy Bice said he has been impressed with the intervention of the Selma City School System. (File Photo | Times-Journal)

For the Alabama superintendent of education, the intervention into a local area school is going as planned.

State Superintendent of Education Dr. Tommy Bice shared his thoughts Tuesday on how the state intervention into the Selma City School System is going. For Bice, the intervention is producing positive results.

“I could not be more pleased on how quickly the folks that are in Selma have responded to the intervention in, overall, a very positive way,” Bice said. “We’ve been extremely pleased with people at the school level and their desire to want to do what’s right for the children in Selma, so we’re very encouraged there.”

Bice said the Selma City School Board has done well in cooperating with the intervention team, with an exception to recent incident involving personnel.

Acting Selma Superintendent of Education Larry DiChiara sent a memorandum in June to the Selma City School Board notifying certain members that their actions are violating polices and procedures.

The memorandum, which cited various violations of the code of conduct, was sent shortly after a 2-2 vote on the proposal to name Aubrey Larkin the new Selma High principal and again on a proposal to name Shayla McCray the new Clark Elementary principal.

“I think there were a couple of times when some of the personnel actions, which we understand in a intervention are never easy, had to be made,” Bice said. “Sometimes boards struggle with those, and I think we saw a little bit of that. Again, we had some discussion there, and the board seems to be on board.”

The three were originally placed on administrative leave in February, at the beginning of the state’s intervention.

In May, DiChiara made a recommendation to Bice for Shirley, McCall and Solomon’s termination. Hearing to contest the recommendation were scheduled for June but later cancelled.

“An amicable agreement” for three to leave the system was reached in early July.

“At the end of the day the buck stops at the top. When things occur that aren’t unnecessarily right for the children, then those individuals have to take responsibility for it, and they have,” Bice said “We’re now moving forward. We’ve wished them well and it’s in the past.”

Another major change made since the intervention is the ongoing process to convert Byrd Elementary into an early learning center for pre-school students that will allow a school that once held about 100 students to serve 300 to 400 preschool students.

Bice said because Selma may have once of the largest number of pre-k classes, it only makes sense that they be housed together.

“I think the consolidation of all those pre-k programs is brilliant,” Bice said. “It gives you the ability to leverage all of the expertise and financial support and instructional support in some place.”

Selma City School Board Henry Hicks Sr. said he pleased to hear Bice’s positive comments about how the system is handling the intervention.

“I think we are trying to make sure we work closely with them to make sure that we get our system back to where it needs to be,” Hicks said. “I’m ecstatic about where we are right now, and I think we’re moving our system in the right direction. I think Dr. DiChiara and his team are during a great job in repairing our system.”

Demopolis resident Jimmie Allen gets his two pit bulls out of the bed of his truck Saturday, after arriving at... read more