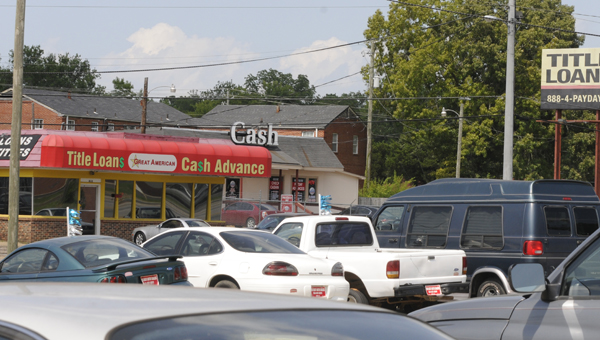 Payday and title loan stores may have to continue waiting to open up shop in Selma.

The city of Selma’s payday loan six-month moratorium, approved on Jan. 30, is set to expire at the end of July. The moratorium prevents payday and title loan stores from receiving a business license during the prescribed period.

One option for the council, with the expiration, is to further extend the moratorium, but Ward 8 councilman Michael Johnson has already decided to try to do so.

“I plan to ask if we can extend it a little longer,” Johnson said. “I know they do help a lot of people, but I just don’t think we need any more in Selma.”

Many of Selma’s payday loans or title loan stores are located on Highland Avenue, one of the city’s busiest streets. Selma is far from the first city to take action against payday lenders and wouldn’t be the first to add time onto a moratorium.

Hundreds of cities around the U.S. have taken similar action. Several cities in Alabama passed moratoriums, including Birmingham, Montgomery, Helena and Irondale.

Midfield’s regulations prevented new payday loan stores from locating within 2,000 feet of other lenders. In 2011, Title Max of Alabama challenged Midfield’s law, but a Jefferson County judge ruled in favor of the city.

Johnson said he would want to extend the moratorium for six months or one year, but also develop a list of regulations based on measures that other cities took.

“I don’t want to put anyone out of business, but on the same token I want to try to help the people,” Johnson said.

Ward 7 councilwoman Bennie Ruth Crenshaw said she agrees with Johnson’s suggestion to extend the moratorium once it expires, but only if regulations are set following the second extension.

“I would support the extension only if we plan to do something concrete,” Crenshaw said. “I don’t want to see us extending it for no real reason.”

Crenshaw said she would prefer regulation that would affect the payday loan store’s operation rather than a location requirement.

“The location isn’t going to change the interest rate,” she said. “To me, they are predatory. They prey on people who cannot go anywhere else.”

Though the moratorium expires on July 30, the council’s next regularly  scheduled meeting is a work session on Aug. 7.

The city council’s next meeting, where it can vote on items, is the following Tuesday, Aug. 12, meaning a small period exists between when the moratorium expires and the council’s next regularly scheduled meeting.

The council could also hold a special called meeting.

An extended moratorium wouldn’t affect existing businesses. Though, it’s unclear how the moratorium might affect businesses that are renewing a business license.

Driving in Dallas County could be a little smoother by the time temperatures drop below zero. The Dallas County Commission... read more