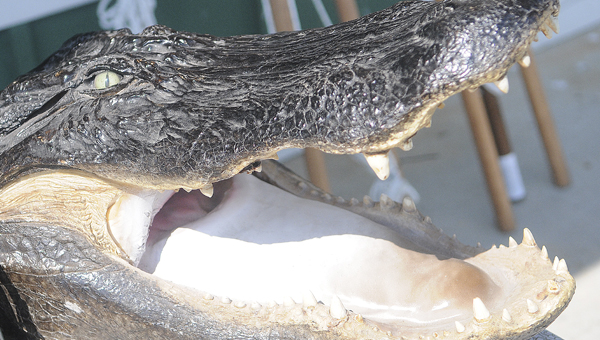 File Photo | Times-Journal
eyes on the prize: This alligator head greeted hunters as they went into an alligator hunting meeting Saturday at the Central Alabama Farmer’s Co-Op. The meeting reviewed the latest hunting regulations and awarded tags to hunters that were lucky enough to receive one for this part of the state.

An alligator hunting meeting Saturday at the Central Alabama Farmer’s Co-Op reviewed the latest hunting regulations and awarded tags to those lucky enough to receive one for the west central region of the state.

A total of 50 hunters received a tag for this part of the state, which includes  Monroe, Wilcox and Dallas County, and most of them attended Saturday’s meeting — which over anything else, stressed safety to those preparing for the season.

“The biggest thing today is safety,” said Justin Brock, wildlife biologist for the Alabama Department of Conservation and Natural Resources. “We don’t want anybody to go out there and get hurt. We don’t want any calls that somebody has run into something — that’s our biggest concern of all.”

Brock ran the meeting, showing hunters a slideshow that went over facts on alligators, proper ways to kill alligator and safety precautions.

Most hunters catch alligators, which can weigh up to 1,000 pounds, by using a snatch hook, but handheld snares, harpoons with a line attached and bowfishing equipment where the line is attached from arrow to bow are all legal as well.

Once hooked, Brock said the key is getting a second hook in the alligator, which makes it easier to get the animal to the boat.

Unlike in other states, the use of bait is not allowed in Alabama.

Once the alligator is to the boat, it must be dispatched immediately after capture. Firearms that can be used to dispatch the alligator are restricted to shotguns with a shot size no larger than No. 4 and bangsticks chambered in .38 caliber or larger.

It is recommended that hunters use electric tape to firmly close the alligator’s mouth  after it is killed and in the boat, just in case the gator is actually still alive. Brock said every year hunters come to Roland Cooper State Park, which is the weigh-in area for this year’s hunt, with an alligator that suddenly springs back to life.

He warned hunters they should make sure the alligator is dead by driving a knife or something sharp into the soft spot behind its eyes.

“People don’t make sure they are dead,” Brock said. “We have gators that come in that haven’t been made sure that they are dead.”

A hunter with a tag is allowed to take a boat full of helpers along with him, but is limited to only killing one alligator. Everyone else in the boat, unless they are under the age of 16, must have a hunting license — which Brock said is the biggest mistake people that get ticketed by a game warden tend to make.

“Most of the time the mistake people make that get tickets is people are on the boat without a hunting license,” Brock said. “One guy will have a hunting license and everybody else thought it was alright to come help.”

This is the seventh year the state of Alabama has had an alligator season. The two alligator hunting weekends for the west central region of the state are Aug. 14-17 and Aug. 21-24 from 8 p.m. to 6 a.m. each day.

Registration for youth football season is off to a quick start, with over 30 players already signed up in three... read more