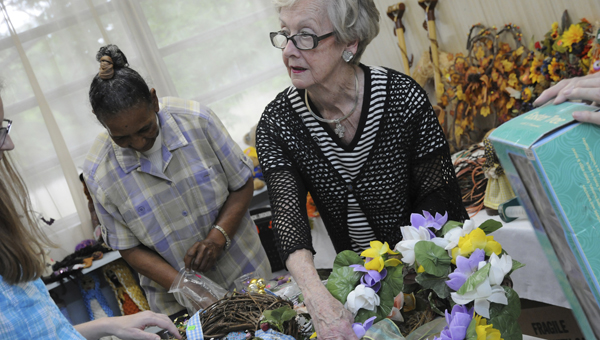 A Selma church group geared toward helping others is giving the public a chance to benefit from great deals while helping a church improve one of its buildings.

Our Lady Queen of Peace Catholic Women’s Society is preparing for its yard sale scheduled for August 2 at 2511 Summerfield Road in Selma. Held Saturday from 7 a.m. to 2 p.m., the sale serves as a fundraiser to update St. Andrew’s Hall.

“It was moved from Cahaba up to where it is presently, so periodical it needs a little face lift,” Women’s Society President Liz Kish said. “It would really mean a lot to raise the funds.”

Moved from Cahaba to Selma in 1880, the building now sits on the corner of Broad Street and Washington Street, next to the Our Lady Queen of Peace Catholic Church.

The women have not set a fundraising goal, but they have some improvements to St. Andrew’s Hall in mind, such as repainting the inside and purchasing a new dishwasher.

Star Trek comic books, wooden crafts, Walt Disney figurines, sewing machines and holiday decorations are among the plethora of items that will be available at inexpensive prices during the Saturday event.

“We checked on the Internet, and [‘N Sync collectibles] were worth $80 for five,” Women’s Society member Andrea Cross said. “We’re selling the set for $20.”

The organization received four former classrooms full of donated items by Tuesday afternoon with more on the way.

“When we first started the project, Ann [Jung] came to the meeting and said, ‘We really don’t have a lot to work with,’” Kish said. “It wasn’t more than two to three weeks later and all of a sudden we had lots of stuff, so people have really answered the call.”

The bond for a Dallas County man accused of his brother’s Monday murder was set at $150,000 Friday by Dallas... read more