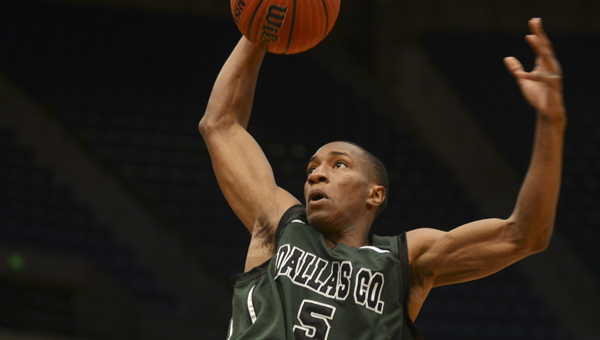 Unfortunately for Dallas County’s Jerrod Moorer, he was on the South squad, which was on the losing end of an 82-64 defeat at the Oliver-Dunn Acadome at Alabama State University.

“We had more talent but they had a better team,” Moorer said.

Moorer, a rising senior, scored four points in the game on 1-of-7 shooting. His South teammates did not fare much better, making just 37.3 percent of their shots in the losing effort.

“I wasn’t really trying to score,” Moorer said. “I was trying to get everybody else involved in the game. That’s one thing my coach told me to do. I was taking shots when nobody else was scoring but I just wasn’t making them.”

The Hornets’ guard was an integral piece of Dallas County’s Class 4A state championship team last season as the second leading scorer on the team.

He said being named an all-star and playing with some of the other great players from around the state has him determined to work hard to win another championship.

“I enjoyed it,” Moorer said. “Everything was good for me.”

But Wednesday night there was little he could do as the North overwhelmed the South to continue a dominant stretch in the series.

The last time the South defeated the North was 2002.

The South led 39-35 at halftime Wednesday but was outscored 47-25 over the final two quarters.

Lee Huntsville’s Gerron Scissum, who was named the North MVP, took over the contest in the second half. He scored 14 points and seven rebounds.

Carver-Montgomery’s Brandon Austin was named the South MVP after scoring a game-high 15 points and chipping in five rebounds.

The South had only five assists the entire game.

Bulldogs getting ready for upcoming seasons

Just like other colleges around the state, Selma University’s basketball and baseball coaches are playing the waiting game as they... read more