Tobacco tax revenue on the rise 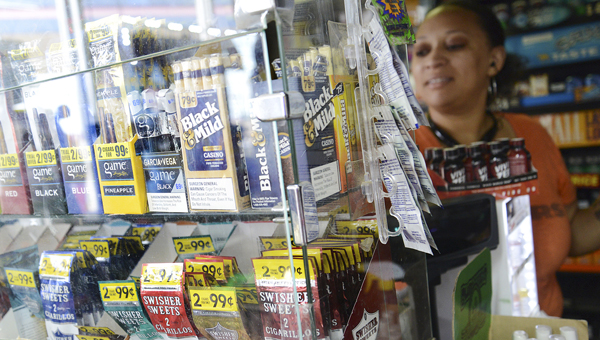 Selma’s fiscal year 2014 tobacco tax revenue is significantly higher than the previous year, but the reason isn’t more people lighting up, according to business owners and city officials.

The city’s total tobacco tax revenue is up nearly $34,000 more than the 2013 fiscal year, according to the city’s latest tax returns. Though, convenience and tobacco store owners say overall traffic has decreased. The answer, according to city officials, is a measure that forced all stores to place small stamps on cigarette packages.

“I would think that [tax revenue] would be less,” said Labib Abdallah, who runs a gas station on the corner of Old Cahaba Road and Medical Center Parkway. “Right here, at my store, it’s dropped by half because of new stores opening.”

Abdallah said he’s noticed seven new tobacco or convenience stores that have opened in Selma in the previous two years.

Finest Tobacco, located just off of Broad Street, is one of the new stores. Though, the store’s manager Hakaam Kaid also reported less-than-steller traffic.

Two city councilmen say the answer to the increase was a 2013 decision to place stamps on all cigarette packages. It’s a decision that was partially made to ensure all businesses were contributing their fair share to the tax base, Ward 1 councilman Cecil Williamson said.

“Now we have means to tell who is paying tax properly, because the stamps are put on the packages by the wholesaler,” Williamson said.

“They were basically just charging for sales tax and weren’t paying,” Randolph said. “When we brought back the stamps, it made [the stores] be honest.”

The increase in tobacco tax is a stark contrast to the overall sales tax revenue for fiscal year 2014. The city’s latest figures show a decrease of $127,000 through June.

Williamson and Randolph said the decrease isn’t due to a decline in business, but rather dishonest business owners.

Dallas County Probate Judge Kim Ballard said he wasn’t aware of any significant decrease in tobacco tax for county government. The county’s overall sales tax for the 2014 fiscal year is slightly more than the previous year, Ballard said. Though, he said Dallas County government’s finances aren’t identical to Selma’s finances and, therefore, wouldn’t be like “comparing apples to apples.”