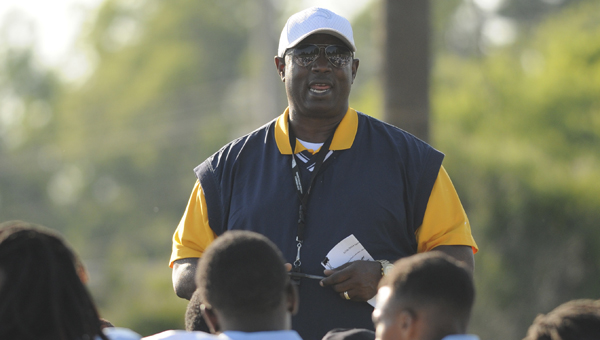 If Morgan Academy hopes to get back to the football playoffs this year, the Senators will have to overcome an extremely challenging schedule.

Based on last season’s win totals, Morgan Academy’s strength of schedule is .672, which is by far the highest number in the county. The tough schedule is nothing new for the Senators, who also faced the toughest schedule in the county last year with a total of .594.

“We are going to have a great attitude and attack our situation,” Wingo said. “I think it is a great opportunity so I am looking forward to it.”

All in all, Morgan Academy faces eight teams that had winning records last season. Nine of the Senators 10 opponents in 2014 reached the playoffs last year.

The Senators aren’t the only county team that will face a tough schedule in 2014.

Keith and Ellwood Christian were the only two Alabama High School Athletic Association teams in Dallas County that did not move up a classification under the realignment for the 2014-2016 season, but both the Bears and Eagles will statistically face tough schedules this year compared to last year. According to last season’s win totals, the Class 1A rivals will face the toughest AHSAA schedules in the county.

Keith plays at Linden in week two — a team that has won 80 games under head coach Andro Williams since he took over in 2007 — and then takes on Maplesville, which lost in the Class 1A state championship game last year. The Eagles also face the two Class 1A juggernauts back-to-back in weeks seven and eight. Both teams face a strength of schedule right at .544 this year.

Southside and Selma appear to have more manageable schedules. Southside faces a schedule that won just 42 percent of its games last year. The Panthers only face two schools that had winning records last year — county rival Selma and UMS Wright, who went 11-3.

“It is wide open,” Southside head coach Daniel Flowers said of his team’s new region in 4A. “Pretty much the last two playoff spots are wide open. If we manage ourselves throughout the season and do the small things right, we can make the playoffs.”

Selma’s opponents had a winning percentage of .392 last year, but the Saints are moving up to Class 6A, which figures to bring its own challenges. Leroy Miles, head coach for the Saints, is expecting every game to be tough, especially with Selma taking on four local rivals.

“It’s going to be tough and then playing Southside, Dallas County and Keith right here locally, we have a tough schedule,” Selma head coach Leroy Miles said. “We are up for the challenge.”

All-star teams fall in state tournaments, but the future of baseball looks bright in Selma