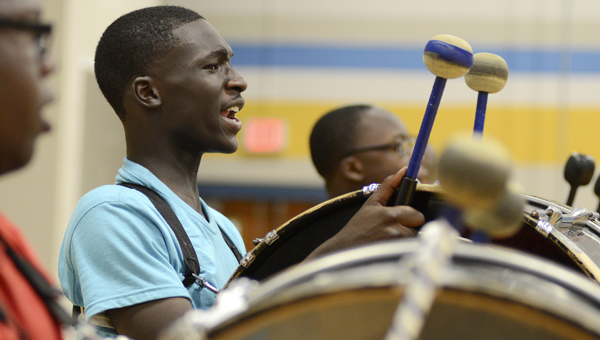 The steps weren’t perfectly timed, and the notes weren’t all in key, but the band was finally back together.

More than 60 members of the Selma High School marching band gathered at 5:30 a.m. Tuesday for the first practice of the season.

The day began with band members doing their stretches and warm-ups outside Tuesday, but moved inside for the remainder of practice after a rainstorm settled over the practice field shortly after 7 a.m.

Band director Brandon Williams — who is in his 10th year in the position — said he is looking forward to working with this year’s young group of talented musicians.

“I have a very new group this year,” Williams said. “The majority of my band is new members, because we graduated so many last year. It’s fine with me, it just means we have to retrain the basics. It’s always … fun.”

Williams won’t be alone in perparing the band for their first perfomance on Aug. 22 during the football team’s season-opening game against Southside High School.

And he is certainly grateful for that.

“I have a solid group of section leaders to help lead the new members of the program,” Williams said. “That is a huge help to me to have these older students who are able to work with the newer members.”

Williams said he has no doubt every note will be hit in perfect rhythm.

“I have no doubt we will get there, God willing,” Williams said. “As long as the students commit to this band, we will be in great shape come August.”

By Christopher Edmunds The Selma Times-Journal With the ring of school bells fast approaching, educators and families are working to... read more