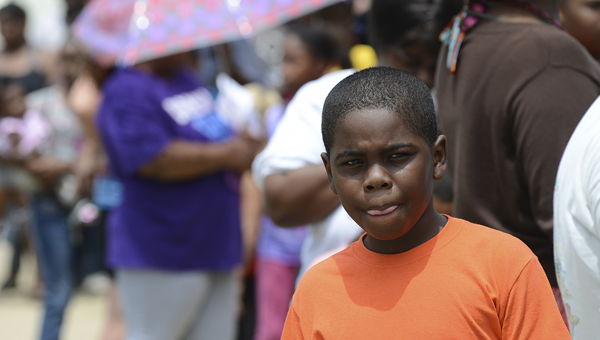 Hundreds of parents and children waited in line to receive free food and school supplies during the ‘Slice of Hope’ event Tuesday evening at the Edmundite Missions food kitchen in Selma. (Jay Sowers | Times-Journal)

Chad McEachern expected a crowd at the Edmundite Missions’ ‘Slice of Hope’ event Tuesday, but he never expected to see 723 parents and students to stop by.

“It’s overwhelming,” said McEachern, CEO of the Edmundite Missions. “We thought we would have a good turnout. I am positive we never envisioned this number of folks.”

Everyone in attendance was given a piece of pizza, cup of soda and potato chips. Each child was given a bag of school supplies.

Selma resident Carmaine Hudson, who brought several of his youngest school-aged siblings and cousins, said the event would help his family prepare for the upcoming school year.

“It’ll help out a good bit,” Hudson said. “I’ve got a lot of family members going to school. This event will help us save some money this year, when it comes to school supplies.”

The pizzas were supplied by Dominoes Pizza on Highland Avenue and general manager James Steele he was honored to take part in the event.

Acting Selma Superintendent of Education Dr. Larry DiChiara attended Tuesday’s event and said the work done by Dominoes and the Edmundite Missions are an example of the power of cooperation.

“There is the expression that it takes a village to raise a child,” DiChiara said. “And you can clearly see today that when you pool your resources, great things can happen.”

McEachern said the event reminded him of the importance of  the work done everyday by employees and volunteers at the Edmundite Missions.

“It reaffirms to me that all the work we do here in the Missions is critical. Folks aren’t here just because it’s fun, and people have been lined up outside since 8 a.m. the need is there. We have these beautiful little kids lined up around the building, and its our job to set them up for a bright future.

By Scottie Brown The Selma Times-Journal   After seeing the need for guidance for the young people in the community,... read more