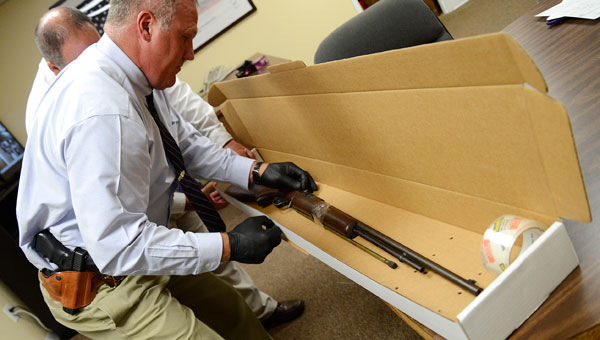 Dallas County Sheriff Harris Huffman said Eddie Mixon, 58, 38 Dallas County Road 294, is being held on no bond on the charge of murder first degree at the Dallas County Jail in connection with the shooting death of his brother Stanley Mixon, 53.

Huffman said deputies responded to calls of shots fired at Eddie’s home near Plantersville shortly before 6 p.m. Monday and discovered Eddie, with his .22 caliber rifle by his side, sitting on the back porch of his house near his brother’s body.

Eddie was arrested at the scene and taken to the Dallas County Jail.

Sgt. Mike Granthum, with the Dallas County Sheriff’s Department, said Stanley was alive at the time deputies arrived, and was transported to Vaughan Regional Medical Center, where he was pronounced dead at 7:59 p.m.

Huffman said both Stanley’s body and Eddie’s rifle would be sent to the Alabama Department of Forensic Sciences for further investigation.

Huffman said both men had lengthy criminal records, and had been visited by law enforcement multiple times in the past.

“They’ve been arguing for 30 or 40 years, but this is the first time in several years we’ve actually had a complaint on either one of them,” Huffman said. “There was some type of argument of some kind yesterday that ended in Eddie killing Stanley.”

Dallas County Sheriff’s Department Chief Deputy Randy Pugh said this was the first murder of the year in the department’s jurisdiction.

District Attorney Michael Jackson said a bond hearing is scheduled for 1:30 p.m. on Thursday, July 24 at the Dallas County Courthouse.

Selma Fire Chief Mike Stokes, center, talks with a first reponder after the two pulled a man from a safety... read more