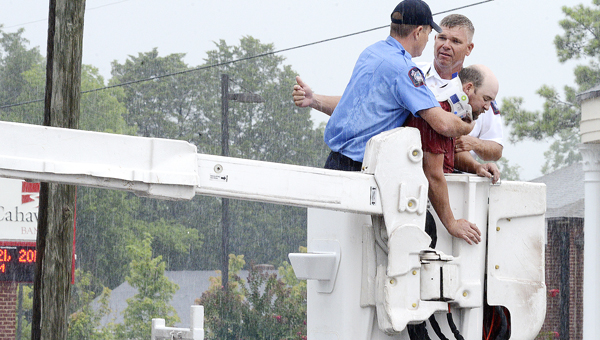 Selma Fire Chief Mike Stokes, center, talks with a first reponder after the two pulled a man from a safety harness that was hanging under a digital billboard on Citizens Parkway Monday morning. Stokes said the man had slipped from a walkway on the billboard and was unresponsive when rescue personnel arrived at the scene. Stokes said the man was unresponsive because his harness had limited his ability to breath for a short period. (Jay Sowers | Times-Journal)

Slippery conditions sent a man tumbling from a catwalk on a digital billboard on Citizens Parkway Monday morning.

While his harness kept the man from falling to the ground, it also left him short of breath until first responders arrived at the scene.

Selma Fire Chief Mike Stokes said the man — an employee of Lamar Outdoor Advertising — was working on the billboard during a heavy downpour when he lost his footing.

“He was working on the billboard and was walking back across the walkway up there, and apparently, because of the wet conditions, he slipped,” Stokes said. “He was in a full body harness, but when he fell, the chest-strap caught him under his neck and cut his air off.”

Stokes said the man, who Lamar officials would not identify, was unresponsive and hanging vertically from the bottom of the billboard when rescue crews arrived.

“He was slouched over, arms hanging down,” Stokes said. “There was no movement.”

As rain poured down, Stokes and another firefighter used the man’s bucket truck to retrieve him from his harness under the billboard next to a gas station and convenience store on Citizens Parkway.

“Once we got the weight off the harness, he took a huge breath and was responsive,” Stokes said. “It definitely felt pretty good to hear him take that big breath when we got the harness loosened up a bit.”

Stokes said the man appeared to be OK, aside from the shortness of breath and a bump on his head, which he apparently suffered during the fall.

Traffic on the southbound lanes of Citizens Parkway was blocked for a short time, as ambulances and fire trucks blocked the roadway.

Emergency personnel loaded the man into an ambulance and he was taken to Vaughan Regional Medical Center.

The Selma Police Department may be receiving new police cars at last year’s prices after placing its order at a... read more