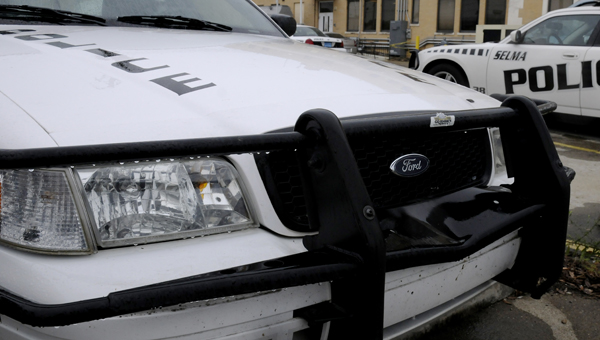 The Selma Police Department may be receiving new police cars at last year’s prices after placing its order at a time when the Stivers Ford Lincoln dealership didn’t have any of the current year models. (Josh Bergeron | Times-Journal)

The Selma Police Department will have to wait a bit longer for its new police cars, but could receive 2015 models at 2014 prices.

The Selma City Council approved the purchase of three new cars for the Selma Police Department in April.

Three months later, the police department is still waiting to receive its three Ford Explorers from a Montgomery-based dealership.

The department initially planned to purchase 2014 model cars, when the purchase was approved, but Selma Chief of Police William Riley said the department placed the order at a time when the dealership — Stivers Ford Lincoln — didn’t have any of the current year model.

“We understand that, when you go to a dealership, you won’t be able to get that model or year at certain times,” Riley said.

He said Friday the police cars had been ordered and the department is simply waiting to receive the vehicles. Riley said he is willing to accept a 2014 edition of the vehicle from the dealership if it means faster delivery.

“From what I understand, there is no major, significant difference in body style,” Riley said.

Upon delivery, Riley said he expects the vehicles to be almost ready for duty and placed in the police department’s patrol division. Remaining changes include placing police logos on the vehicles, installing an in-car camera and a portion of the department’s laptop mount.

The city hasn’t paid its first-year amount for the cars and likely won’t until the cars are received, Selma City Council president Corey Bowie said.

The department last received new police cruisers in 2010 as a part of Selma’s $12 million bond issue. Riley said the department was able to purchase seven cars at the time, which was enough to replace half of the total fleet.

When making his appeal earlier this year for new cars, Riley described the increasing age of many of the vehicles Riley said Friday the new vehicles would help lessen the use of older vehicles.

“Our cars are running constantly, it’s not like a personal vehicle,” he said. “If we infuse some newer vehicles into the fleet, some of the older cars can sit and not run as hard.”

With increased vehicle age, engine parts need to be replaced along with regular scratches and dings. The vehicles’ age is evident in the fiscal year 2014 budget, as the police department has already exceeded its allotment for vehicle repair.

To help with repairs, the Selma City Council transferred a total of $55,000 to the police department for vehicle-related expenses. The transfer would send $20,000 to the department’s vehicle maintenance fund and $35,000 for auto fuel.

Riley said he is unsure whether the police department would request additional funding vehicle maintenance funding in its fiscal year 2015 budget.