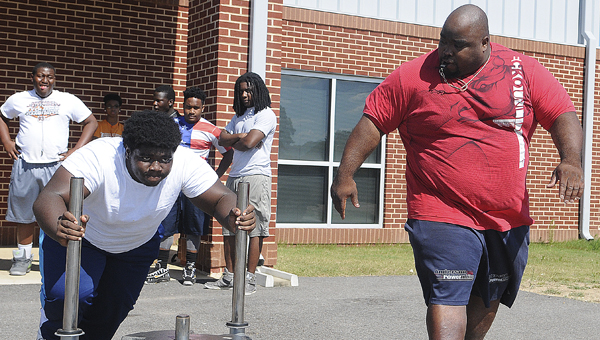 For the first time in school history, Selma High School will have a wrestling program for the 2014-2015 school year.

After talking to several coaches about adding additional sports programs to the school, acting Selma Superintendent of Education Larry DiChiara said wrestling was added in part because of its relatively low cost. DiChiara said adding new athletics programs is always beneficial to students.

The school has already bought wrestling mats, which are blue and gold like the Saints’ colors. DiChiara said he projects starting the program will cost around $10,000, but that cost will be much smaller from year-to-year because the mats are reusable and the singlets, or uniforms, are not a large cost.

The head coach of the team will be Robert Wilkerson, who also serves as the football team’s defensive coordinator and strength and conditioning coach. Since the school has just recently received the equipment and the program is brand new, Wilkerson plans to start slow this year with just a couple of tournaments.

“Maybe [we will do] one or two tournaments this year, learn the system, know who we are wrestling, get in there and see where we are at,” Wilkerson said. “Then, next year when we start, we can definitely take it to another level to where it is actually implemented into the program 100 percent.”

Selma will be competing in the South division of the Alabama High School Athletic Association’s Class 1A-Class 5A wrestling alignment, Wilkerson said.

“We just want to start the program, get it off the ground and try to get familiar with what we need to do to be championship wrestling program,” Selma athletic director Patrick Evans said.

Wilkerson said the program’s first year is probably going to include a steep learning curve for him. Wilkerson did not wrestle during his time at McAdory High School, because the Yellow Jackets did not have a wrestling program until his senior year. By that point, he was already on his way to playing football at the University of Alabama and wrestling was in his rear view mirror.

“As far as wrestling, there are several techniques that I don’t know,” Wilkerson said. “I know the basics of wrestling and some of the rules, but there are certain things only a wrestler can coach so for me, it’s going to be about learning how to do practice schedules and conditioning routines.”

He’s already trying to learn as much as he can about wrestling before school gets under way. Wilkerson said he is going to attend several clinics in the upcoming weeks.

“When football season ends, I will start tryouts,” Wilkerson said. “I will have an interest meeting and explain what I am doing, but I am not going to take away from a good football team.”

Wrestling may not be the only new program Saints’ students have to look forward to in the future. Evans said the school has also considered reviving its tennis program, as well as starting golf and soccer programs at some point.

Southside, Wilcox battle in 7-on-7 game