Southside, Wilcox battle in 7-on-7 game 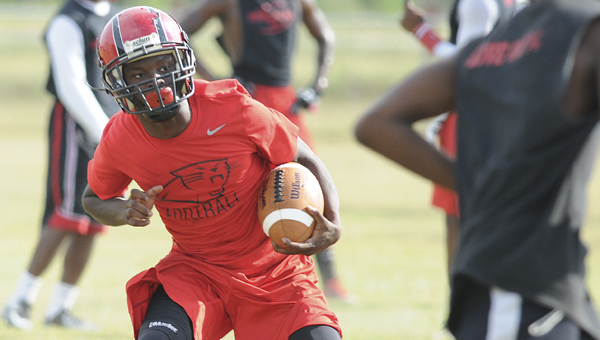 It wasn’t pretty, but Southside defeated Wilcox Central 14-7 in a 7-on-7 game Tuesday at Southside High School that was highlighted by defense and out of sync offenses.

The 7-on-7 was broken into two sessions, but neither resulted in a lot of points. In the first part of the game, each team had seven possessions apiece, but only one touchdown was scored by each squad.

“I think it is just timing and trying to get used to their routes,” Southside head coach Daniel Flowers said of his team’s slow start. “We have guys coming in that are trying to get their timing down. We ran good routes but we dropped a few passes.”

Wilcox Central’s Joshua Finkle scored the first touchdown of the day, and Southside answered with a Khamari Gibbs throw to Jhlandius Sullivan to knot the score, but that was all the scoring in the first session.

Gibbs didn’t seem as sharp as he was during Southside’s first 7-on-7 meet of the offseason in June when he and teammates torched defenses, but the Panthers own defense did more than make up for the offense’s sluggish showing.

“Everybody is lining up and playing ball,” Flowers said. “They communicate on defense. I see a lot on defense, with guys telling each other where to be.”

Wilcox also helped out some, with seven or eight dropped passes keeping the Jaguars off the scoreboard.

“It has never been a perfect game,” Wilcox Central coach Darius Gilbert said. “There’s always going to be some dropped balls but to come out here and compete, that’s what the summer is for. Maybe we won’t have as many [dropped balls] in the fall.”

Bad weather also likely contributed to each team’s poor offensive showing. After a short water break separated the game’s two sessions, the wind started whipping around the field and rain poured from the sky, making it hard to throw the football in a game where passing was the only option.

Tuesday marked the third 7-on-7 for the Panthers this fall. After hosting four teams in late June, Southside and Linden practiced together Friday.

Tuesday marked the second time this summer that Southside battled Wilcox, because the Jaguars also participated in the Panthers’ first camp of the offseason.

Keith was originally scheduled to participate in Tuesday’s 7-on-7, but the Bears were unable to make the trip.

Ellwood Christian quarterback Jalen Furlow looks towards a covered receiver in a 7-on-7 game against Hillcrest-Evergreen Tuesday at Southside High... read more