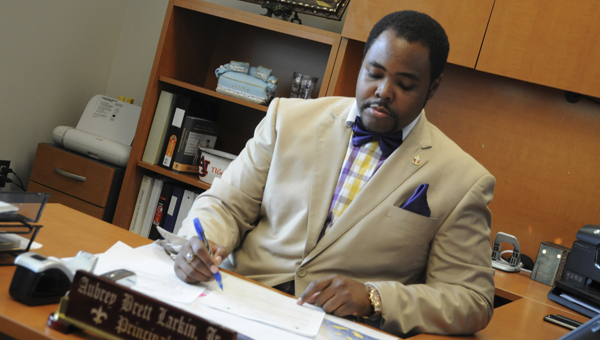 Selma High Principal Aubrey Larkin Jr. works at his desk Tuesday afternoon. Selma High is one of many schools located in the Dallas County area preparing for the return of students this upcoming 2014-2015 school year.

Area school halls that may have been fairly quiet these last couple of months will soon be booming with the sounds of students starting the 2014-2015 school year.

Those employed at the schools located in Dallas County are preparing for the students to return in August. According to some school administrators, the process can easily take an entire summer to complete.

“It gets better [each year] but the workload is still the same, because you come up with even more ideas for improvement for the next year,” said Renee Callen, the headmaster of Meadowview Christian School.

The adminstration, faculty and staff have worked to update textbooks, implement additional fitness activities into the school day and much more.

They are also considering adding electives that would focus on current events, creative writing and journalism.

Callen said her top priority, as headmaster, is to introduce new changes that will leave a positive impact on the Meadowview students and employees.

“We’re trying to think outside the box to come with innovative and creative ways to improve our school and meet the needs of the community,” Callen said.

Callen said she is hoping 150 students are enrolled in school when it begins in August, so it will exceed last year’s enrollment amount.

Selma High Principal Aubrey Larkin Jr. said approximately 900 students are enrolled at Selma High this 2014-2015 school year, which also begins August 11, and the school faculty, staff and administrators are doing everything possible to make sure they are ready for the students’ arrival.

Among the list of tasks completed in preparation for the new academic year are several physical modifications. School repairs have been made, new paint jobs have been applied, floors have been waxed, audio-visual monitors have been added as well as other alterations.

As someone recently hired as principal in at Selma High, Larkin said collaborating with other Selma High employees to plan the new school year has been fairly easy, because the support he has received from the central office and his previous experience as a Clark Elementary principal.

Larkin said the registration process for a high school is similar to that of an elementary school.

“A lot of it has been the same,” he said. “The only difference is it looks different, and it’s on a larger scale.”