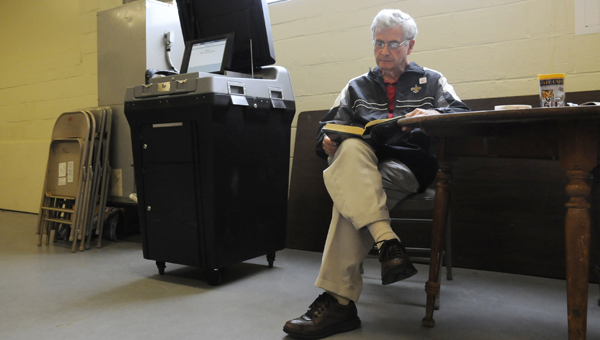 Poll workers throughout Dallas County had plenty of time to read and complete crossword puzzles due to extremely low voter turnout for Tuesday’s runoff election.

“We wound up with 1.92 percent turnout, and that’s deplorable for any election, especially when you consider on a statewide basis, more than $3 million was spent to have this election,” Ballard said. “It was very quiet. We had to pick up the phone just to see if it was working, and usually during elections you answer the phone all day.”

Three races appeared on Republican ballots Tuesday, as well as a constitutional amendment regarding the cotton industry. There were no Democratic races to be decided Tuesday, but voters could still vote on the cotton amendment.

“From a democratic side, we had no candidates,” Ballard said. “Dallas County voters are vastly Democrat. The statewide interest in the secretary of state, state auditor and public service commission just didn’t interest a lot of people in Dallas County.”

The cotton amendment received the most interest at the polls, with 463 Dallas County voters saying yes to the amendment.

Statewide, the amendment, which extends the cotton check-off program to use cotton producer money for marketing and research, was approved.

Ballard said besides a temporary power outage forcing one location to start later, no major problems were reported at the polling places.

Two polling locations tied for the record-low number of votes cast. At both the Selma Mall and Selmont Water Works locations, only 3 ballots were cast.

Mike Jung worked at the Memorial Stadium location from 7 a.m. to 7 p.m. Even though his station saw the most action — 58 votes total — Jung still had plenty of down time.

“It’s a 12-hour shift, so I brought plenty of books and puzzles,” Jung said. “We knew we would see less than 100 voters today.”

Jung said he hopes more people show up for elections in the near future.

“If it’s an election, I think you ought to vote,” he said. “That’s the way we have to express our opinions.”

Lanes to close for improvements to two Selma bridges

Construction workers secure rows of metal rebar in place as they install a concrete barrier rail on a bridge on... read more