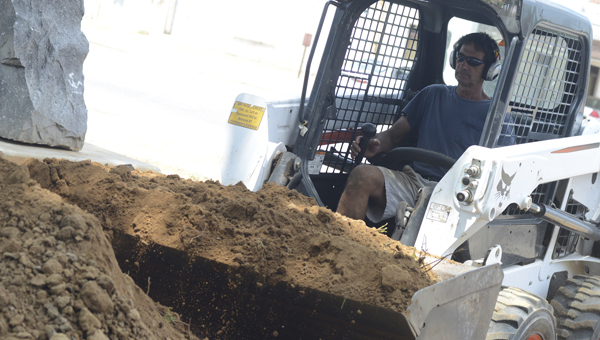 This week, Selma City Councilman Greg Bjelke rented a Bobcat earthmover to level off and level several truckloads of dirt that had been dumped at the site after repairs were made to a collapsed storm drain under the park earlier this spring.

Workers repairing the storm drain removed brick walls and shrubbery that surrounded the park, meaning all new landscaping needs to be done.

“The cemetery department donated the soil, and at my own expense I am spreading it around,” Bjelke said. “I don’t know if it’ll be this week or next, but after it’s all leveled off, I will prepare to lay some sod.”

Bjelke said he also planned to plant flowers around the base of the park’s monument to French explorer Jean Baptiste Le Moyne Sieur de Bienville.

“We’ll do some detail work, lay some sod, leave some room around the monument for flowers,” Bjelke said. “I think we will do something simple and tasteful.”

While working on the site Monday, Bjelke said several people had stopped to thank him for the work he was doing at the park or to ask about the park’s future.

“It kind of seems like everybody in the world is stopping to talk,” Bjelke said. “I didn’t know how important this was to people. People are very interested in this project, and I hope it can be a pretty little space for the people of Selma to enjoy.”

While others have worked on the project, Selma Mayor George Evans said he was not shocked at all to see that Bjelke — a professional landscaper — had taken the lead on the project’s finer details.

“This is Greg’s line of work,” Evans said. “He knows what he’s doing. I thought it was great of him to take on this work because he knows it better than most. I certainly commend him on his work out there. I think it’s good that we are trying to bring closure to it.”

Attorney David Norton, who has worked out of his office next to Bienville Park since 1995, said he hopes the park can be a bright spot in the community once all the work is done.

“I think if they cleaned it up and made it look good, it could be an attractive place for people to come and enjoy,” Norton said. “And as far as what [Bjelke] is doing out there, I hope all the people in government would do that and really take personal responsibility.”

Evans said he has met with Bjelke and other council members to discuss additional work that will need done after the ground is leveled and grass is planted at the park.

“We’ve met and discussed putting up a fencing or wall on the backside of the park for safety purpose,” Evans said. “We are looking into the cost of that now. We are getting some pricing right now.”

Selma City School counselors will have more days to complete their work following a decision made Thursday by the leader... read more