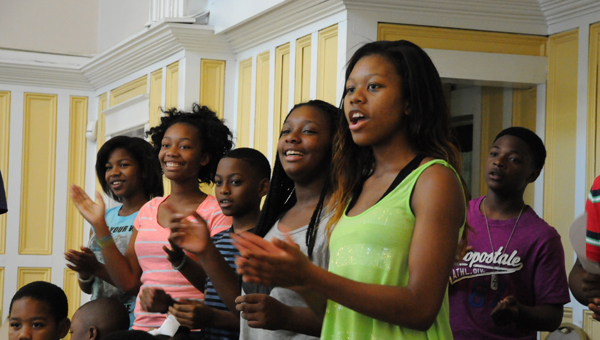 Making a joyful noise can require hard work and dedication, but the music ministry of Tabernacle Baptist Church is up to the task.

“Music is essential to our worship experience,” Culliver said. “It plays a great role in determining how the worship service proceeds and flows.”

Culliver said music is needed in the church because unlike sermons, everyone participates in singing worship.

“When I preach, it’s more me giving instruction from the Bible, and it’s relegated to a speaker and listeners,” he said.

“When there’s music involved, it invites everyone to participate and worship together.”

There are several different parts to the music ministry at Tabernacle Baptist Church. The church currently has four choirs, including men’s chorus, gospel choir, mass choir and youth choir.

Vanessa Goodwin, director of the mass choir and gospel choir, said working together is important to produce a valuable Sunday experience.

“Imagine the whole church service being like a cake,” Goodwin said. “We have our church members, who are the ingredients, and then the choir does the stirring, and the pastor does the cooking. One can’t work without the other. Everything has to blend together in order for us to have a good church service.”

Every Sunday, one of the four choirs performs a total of four songs during the service.

The songs vary from traditional hymns to contemporary praise music.

Goodwin said she sifts through her music collection to find songs that appeal to every generation.

Goodwin said the two musicians at the church excel in these different styles, but they often play together.

Demetrius Stallworth, who plays piano, keyboard and organ for the church, specializes in more contemporary music, but said he can learn pretty much any song in time for rehearsal and service.

“It depends,” Stallworth said about how long takes to learn new music. “Certain songs you can vibe off of stuff you already know and pick it up real quick.”

The efforts to appeal to everyone with musical variety have paid off since last year.

Angela Smiley, director of the youth choir, said she has seen the group grow tremendously over the past year.

“We went from five to eight to 11 to now 23,” Smiley said. “It’s not hard to find youth to join the choir because we do the songs they like. We’ll change songs if they don’t like them, so we’re trying to keep them happy.”

The joy experienced by the choir has spread throughout the church, which is why Culliver has even stuck around in the Pastor’s office to listen to rehearsals.

“The quality of the sound of the vocals in our choir blows my mind,” he said. “There’s been times that I’ve been getting ready to leave as they come in, and I’ve just waited to listen and hear excellence unfold.”

Slice of Hope to provide pizza, school supplies for those in need

Edmundite Missions has scheduled a Tuesday event that is sure to bring a slice of hope to parents who cannot... read more